Jersey to make bid for the Mets

WHAT THE HELL! Its happening! Things are a Changing! First The Expos are moving to DC, and now a new METS shakeup! Could it be true? The Mets would play in New Jersey? I am excited about both stories and look forward to see what happens in the months to come!

New Jersey is about to make a pitch to lure the Mets to the Meadowlands Sports Complex.

Zoffinger has been talking with baseball officials about the possibility of bringing a struggling small-market team to a new baseball stadium in East Rutherford, but he agrees with Codey’s play for the Mets. Zoffinger said Codey will contact Mets owner Fred Wilpon in the coming days.

THE DREAM IS OVER! Our dreams of going to Montreal and catching foul balls are now just a memory!

WASHINGTON (AP) – Baseball is returning to the nation’s capital for the first time in 33 years, in the form of the Montreal Expos.

“It’s a day when the sun is setting in Montreal, but it’s rising in Washington,” Tavares told a news conference at Olympic Stadium in Montreal.

Got an awesome email from a Chris Weagel. Just wanted to share his email and his awesome site! He inspired me to do more future Video Blogs 🙂 He is truly talented and I wish him the best! HAPPY BIRTHDAY! HEY WHERE DO YOU LIVE ANYWAY ? 🙂

There are more of us out there. Visit my video blog:

Also, I have a huge Lego collection as well. (ROCK ON – ROB)

God these guys ROCK! Check them out! I heard that song in a video game of all things the other day!

Ha! I forgot to renew my name! 🙁 oops As you read this it is prob back up 🙂 ! Thanks CV for telling me !

Ok back to working on my site!

Heard the new U2 track! Pretty Awesome! I also heards tracks from I-Tunes on the new REM CD, but was not as impressed as the new U2 single 🙁 Whats with REM? The last few albums keep falling flat! Lets see how thier CD does.

U2 Sets Album Track List as Single Takes Off

NEW YORK (Billboard) – U2 has confirmed the full track list for its upcoming album, “How to Dismantle an Atomic Bomb,” due Nov. 23 via Interscope.

The set does not include the tracks “Tough” or “Full Metal Jacket,” which band members previously had mentioned as possible selections. Among the newly announced titles are “Miracle Drug,” “One Step Closer” and “Love and Peace or Else.”

The album’s first single, “Vertigo,” is already making a bomb-size impact on U.S. radio outlets. After just three days of airplay, the cut is expected to debut this week in the top 20 of Billboard’s Modern Rock Tracks chart and the top 30 of the Mainstream Rock Tracks tally.

At present, “Vertigo” is available for download exclusively via Apple’s iTunes Music Store. According to a spokesperson, the track ascended into the service’s top 10 within 24 hours and is now No. 1 on the list of most downloaded selections.

U2’s official Web site (http://www.u2.com) is hosting clips of the band performing “Vertigo” in its Dublin recording studio plus other exclusive footage of a recent photo shoot.

And while the band is not expected to begin touring until next spring, tidbits have begun leaking out about specific stops. According to Ireland’s Sunday Business Report, U2 will play Dublin’s Croke Park on June 26-27, with the possibility of a third show, depending on demand.

Here is the track list for “How to Dismantle an Atomic Bomb”:

This Weeks Stops! Come Down And Have A Cold One!

Just wanted to chime in with a mini review of the Star Wars box set! HOLY COW! Well worth the the 8 plus year wait I have had my first DVD player! It is truly AMAZING! I can not believe that a movie made in the mid 70’s could look so vivid and amazing the way Star Wars Episode 4 looks! Granted the other two look awesome! I really like the special editions and the newly added graphics and scenes. Some stuff was a little corny but it still looked so amazing! The extra disc is also amazing! I caught some of the special that is on the disc on A&E over the weekend. That was an edited version of this 2 and 1/2 hour epic, that is worthy of the price of the DVDs alone! Lucas also came out with Battlefront, a new Star Wars game I am excited to try out! I will let you know! 🙂 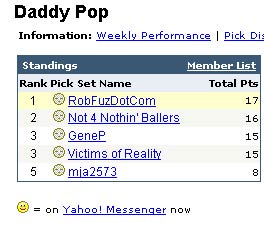 Just in case anyone was wondering Fantasy Football Team RobFuzDotCom is in FIRST read it and weep FIRST in the official Daddy Pop Yahoo Football Fantasy League! Also Chris Lee’s RobFuzDotCom team in my brothers league is in a respectable THIRD! I’ll take it and I will Gloat all I can cause you never know what next week will bring! By the way you did read right, there are TWO teams named after my web site! Gotta Love it!!! GO ROBFUZDOTCOMERS! 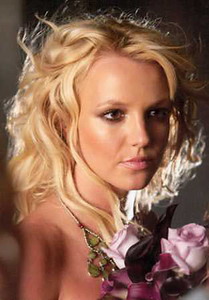 Did Britney Spears try to avoid paparazzi by staging ‘secret’ nuptials last weekend — a month ahead of her scheduled dream day in October? Or did she take the media for a ride by staging a fake wedding and selling the pictures in an elaborate hoax? These were the questions swirling about on September 22, 2004 as People Magazine published ‘exclusive’ wedding photographs and rival Us Weekly claimed it had a document proving the whole thing was a fake. Spears is shown in a shot from a new video.

What is up with Britney? Come on this is wedding # 2 for the year and she is getting pretty wacky! I have to get the skinny to see what really happened if she’s married, she is not married? What the hell! I feel something like this will hurt her both ways, just like the confusion around J Lo’s Marriage. I STILL am not convinced J Lo is really married! :O 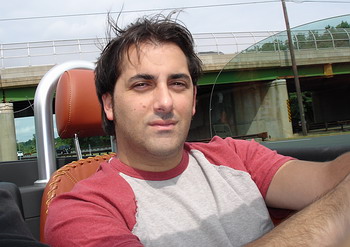 I know 3 people with the same birthday today! Happy Birthday guys and enjoy the day!

Click Here For My Video Blog From AC BABY! 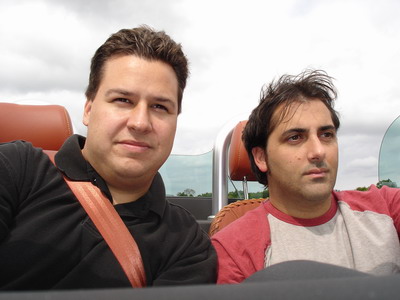 Take a look at our cruise down in Rory’s TT and my illegal video taping in the casino 😉 hehe!

Will be seeing Cheap Trick again @ The Starland! Should be cool! Then I am jetting up to New Brunswick for the Olive Branch’s Back To School Coors Light Party! Come join me! 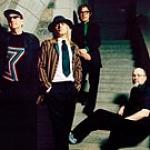 Cheap Trick comes to the Starland Ballroom this Thursday night! Tickets are on sale now through Ticketmaster, Vintage Vinyl and the Starland box office

Less than a week away and the news is coming out about the Star Wars box set! I think some of the changes are kind of pointless, but interesting all the same! -Rob 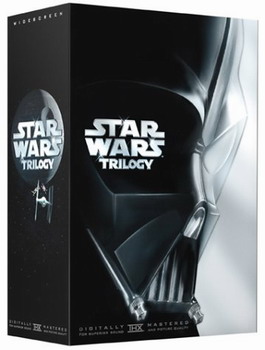 – 50’56’ to 52’05’ : Emperor’s hologram has been reshot with Ian Mc Dairmid. A new dialog has been recorded and Palpatine informs Vader about Luke’s real identity!

Return Of The Jedi:

– 24’44” and after : Edge transparency defects around the Rancor have been removed.

– 115’41” : Old Anakin’s eyebrows have been erased and eyes are now blue, to fit with Hayden Christensen.

– 120’44” : Naboo has been added to Tatooine, Bespin, Coruscant and Endor victory celebration scenes.

– 122’30” : As everyone knows already, Hayden appears as a ghost beside Yoda and old Obi-Wan at the end of the movie.

A Day To Remember 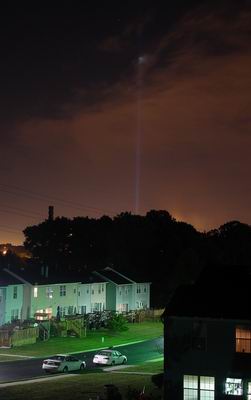 The view from our house of the two light beams that illuminated the sky in memorial of the Sept. 11 attacks on New York’s World Trade Center.

What more can you say, a day to reflect and look back at what happened. It really hit me comming home driving up north on the Parkway.

Come Out And Say Hi !

Holy Crap! The one set of DVD’s I have been waiting FOREVER for have finally arived on th 21st! I am very excited to see them so close and will prob have a few entries about it. My bud Chris is so awesome every morning, giving me the latest news and great news, so I asked him to be a guset Blogger on my journal!

Keyarts Chris – George Lucas, up to his tricks

With the advent of the release of the original Star Wars trilogy on DVD ol’ George Lucas is up to his tricks yet again.

Now we’ve all been hearing how the movies have been altered again (since the special edition release in ’97). Some purists didn’t like their precious original being tampered with 7 years ago and let George know about it. I guess I’m not a “purist” since I didn’t mind the changes and thought some of them actually helped the story. One scene change in particular had fans up in arms. The original cantina scene from “Episode IV – A New Hope” in 1977 showed Han Solo (Harrison Ford) sitting at a table with Greedo-a novice bounty hunter. The two get into a discussion involving money owed and eventually Han Solo becomes bored with the dialog (as well as fearing for is own safety) and using his blaster under the table, shoots Greedo dead.

In the 1997 special edition, Lucas changes this scene so that Greedo actually fires first and misses (pretty bad shot at 2 feet away) and then is shot dead by Solo. In this PC world I guess Lucas felt it was the right thing to do but this did not sit well with the fans-kind of like how Jar Jar Binks was not well received in Episode I – The Phantom Menace. So now with the release of the original trilogy DVDs, this scene has been altered again to have both Solo and Greedo fire at the same time. This is a poor attempt to appease the fans and still remain PC and not make it look like Solo made the first move. Come on George! We know Greedo’s a bad guy. Why can’t Solo just dispatch him first and get on with the movie as it was before? Well I guess there is a “purist” in me after all.

Believe it or not my bud Chris Lee has named his fantasy football team RobFuz.com .  It was a last minute idea of mine, and he went with it!  Formally the team was called Fat Alverez (a mistake a few years ago that stuck when someone thought Lee said that, but wanted the name Fat ALBERTS) Chris Lee’s team went on to greatness!  Good luck RobFuz.com! 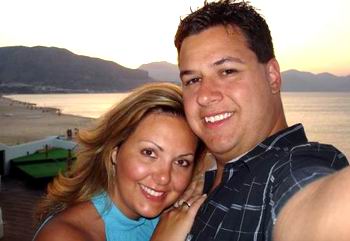 HAPPY BIRTHDAY TO MY WIFE JOSEPHINE!

I LOVE YOU VERY MUCH HUN! 😉 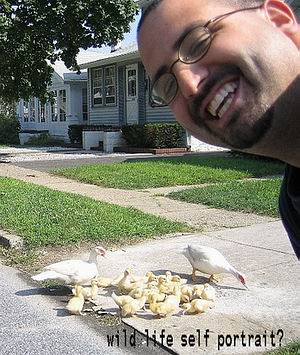 Gleny and everyone else has been quit with our on going self portrait contest! Props to Gleny for picking up the ball again and getting a new category going! 🙂 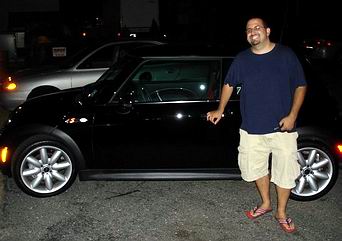 Also, Gleny stopped by the Boathouse and showed me his amazing new car! I really loved it and was surprised how roomy a mini can be 🙂

All the new fall movies are starting to be revealed and I cant wait to see Pixar’s new movie The Incredibles! It looks really awesome! I am excited to see where the world of computer animation is going! If you notice, this is the first time a Pixar animated movie featured a human being. In the past movies they experimented with humans and have come a long way with showing humans in animation. I learned way back from my bud Chris how complicated it is for doing people and making it believable. There are also other kick ass computer animated movies coming down the pipe such as Shark Tail and The Polar Express and I am excited to see these almost life like movies!