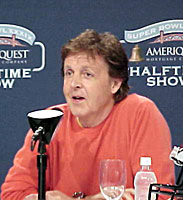 THANK GOD! God forbid we see another pair of breasts this year hehe! Anyway, looking forward to see Paul McCartney! What a difference a year makes! With all this crap about the FCC, Michael Powell, Howard, Howard moving to Sirrius, Powell Retiring, GEEZ! This year is different! I am defiantly looking forward to the game and wish the Eagles the best!

JACKSONVILLE, Fla (Reuters) – Ask just about anyone what they remember most about the New England Patriots’ dramatic 32-29 victory over the Carolina Panthers in last year’s Super Bowl and chances are you will get the same answer. “I remember Janet Jackson’s breast,” said Tom, a Philadelphia Eagles fan enjoying a drink at one of the parties ahead of Sunday’s Super Bowl showdown with the Patriots.

“That’s all you heard about for weeks, but that’s not what they’ll be talking about after we win on Sunday.” The NFL has taken steps to ensure nothing happens to overshadow this year’s showcase event.

Paul McCartney has been brought in to headline its halftime show, the 62-year-old former-Beatle guaranteeing there will be no problems in his 12-minute performance. “It’s a great honor to do this,” said McCartney. “People may have concerns of another wardrobe malfunction, but I can safely tell you that I won’t. “I’m not going to say what we’re doing because you know that spoils it. We will pretty much get up there and just use the time allotted to rock.”

One Reply to “No Wardrobe Malfunction at Halftime Show”