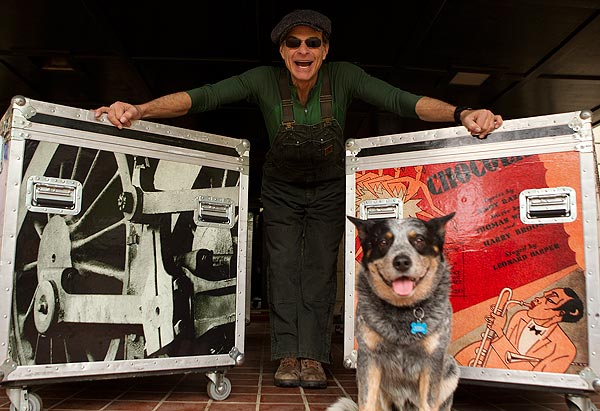 The Van Halen frontman discusses the band’s new tour, new album (his first with the group in 28 years), Eddie Van Halen and almost everything else.

It’s an old joke, but when David Lee Roth delivers the punch line it sounds more like a mission statement: “How many lead singers does it take to put in a lightbulb? One. You hold the bulb and wait for the world to revolve around you.”

Missing from the joke is how the singer is left standing there in the dark waiting for his proper wattage.

On Feb. 7, Interscope Records will release “A Different Kind of Truth” and, as the world turns, it will represent the first Van Halen studio album featuring Roth as lead singer since “1984? — which was released 28 years ago this month, right before Ronald Reagan announced plans to run for a second term.

Time flies — or does it drag? Earlier this month, on a crisp, sunny morning in Pasadena, Roth, now 57, welcomed a visitor to his 20-room, Italianate mansion to talk about Van Halen past, present and future.

Roth actually rejoined the band “five summers and a million years ago” for the 2007-08 reunion tour, but it’s taken this long for the still-volatile collective to finish an album that satisfies all of their agendas. The amazing thing is that they finished at all; like the Beach Boys, Eagles, Red Hot Chili Peppers, Guns N’ Roses and Fleetwood Mac, Van Halen is part of the Southern California history of world-class soap operas disguised as platinum-selling bands.

Van Halen’s brawny brand of music has sold more than 80 million albums, but offstage the group has been a fragile alliance that has fallen apart again and again because of creative clashes, drug torpor, grudges and, more recently, health issues.

“We accused each other of betrayal and thievery and lies and treachery,” said the upbeat and chatty Roth. “And it was all true. We were all guilty. Dig up the past, and it’s going to get all over everybody. And, man, do we have a past…”

The history traces back to 1972, when the Van Halen brothers, guitarist Eddie and drummer Alex — a pair of classically trained teen musicians born in the Netherlands but raised in Pasadena — auditioned singers for a planned band. Roth didn’t make much of an impression at his tryout, but the brothers wanted to use his sound system and letting him in the band was better than renting the gear.

Fame and fortune would follow, but again and again it was the brothers Van Halen deciding who should hold the microphone. They could do that because of the stature of Eddie Van Halen, who is revered by rock fans as a sort of mad-genius guitar god, the heir of Jimi Hendrix. He might also be viewed as the Elizabeth Taylor of rock considering the way he divorces lead singers, including Sammy Hagar — and, if so, Roth is forever his Richard Burton. Roth, meanwhile, passed time touring with an Eddie Van Halen soundalike and at one point did a double bill with his rival Hagar to pique attention.

The reunited frenemies are a source of fascination, and fans are eager to see them share a spotlight when the reconstituted band (with Eddie’s son, 20-year-old Wolfgang Van Halen, who replaced longtime member Michael Anthony on bass) starts a 46-date arena tour in Louisville, Ky., on Feb. 18. The music industry, meanwhile, is watching the whole enterprise and wondering if the wheels will fly off; more than squabbles, the worry is also about the state of Eddie Van Halen, a rehab veteran who has also lost a third of his tongue to cancer and undergone hip replacement. There were postponed shows on the last tour (2007-08), which were explained only by vague promoter statements about medical procedures.

“He’s doing really well,” Roth said. “He’s lucid, he’s sober, he’s playing. You know, I don’t know if Ed has ever feltgood. There’s a thin line between rage and great work. He really never enjoyed his fame or success, and that might be part of what compels him.”

(All Van Halen family members, through their representatives, declined to be interviewed for this story.) Despite all the squealing guitar thunder, Eddie Van Halen seems like a man surrounded by his own silence.

Roth, meanwhile, hides behind the sound of his own voice; the man never stops talking, but most of it is a jibber-jabber jive, a Cartoon Network version of classic-rock kung fu and spitball metaphysics.

The most consistent message amid the barrage was the magical legacy of Van Halen and the urgent need to live up to it with the new album and tour.

“Are there second chances? I don’t know, Mr. Faulkner, I’m tending to agree with you: No. We’ve managed to stretch our adolescence like a Chiclet to the moon and maintained the respectful dignities along the way that got us on that turnpike up in the first place. We love what we do for a living. Even in our wildest, most beer-soaked days we never missed rehearsal.”

In their youth, Roth and the Van Halens were clearly bonded by their love of hard rock, but Roth says they were also connected by the “immigrant energy” of their families, who were “desperate people seeking desperate fortune — with a smile.”

Roth was born in Bloomington, Ind., as the son, grandson and nephew of Jewish doctors, but the north-star figure in his youth turned out to be Manny Roth, the uncle who owned the Café Wha? in New York.

It’s one of the more illustrious dives in Greenwich Village — Bob Dylan played there, so did the Velvet Underground and Lenny Bruce — and despite the peeling paint and low ceilings it was a palace of possibility for young Roth. “I was 7 years old when I decided very specifically what I was going to be, and it was there in that room,” he said.

On Jan. 5, Roth was back in the club; the “secret show” by Van Halen was meant to stir press, rock radio and fan interest, and it did all of the above. The New York Times covered it enthusiastically, with Jon Pareles writing that Van Halen is “still one of the most limber bands in hard rock, with a higher center of gravity than most.” Even better, there was old Manny Roth, now 92, beaming at his nephew from the audience.

During the show the band played a vamping, boogie-propelled song called “She’s the Woman” that will be on the new album. The song has considerable history; a version of it was on the demo record (produced by Gene Simmons of KISS) that landed Van Halen a deal with Warner Bros. in the 1970s.

Throughout the album, the band has gone back and excavated pieces of unrecorded songs, lyrics from old notebooks and half-pursued concepts to build the 13-track collection.

Instead, Roth said, he and the band have tried to do a sort of collaboration with their past. They can’t be the same people — too much has changed — but Roth said there’s interesting experimentation in the era-spanning synthesis of self.

The process started with Eddie Van Halen and producer John Shanks (Bon Jovi, Keith Urban) sifting through archival material, looking for the nuggets that could be mined.

“Some of it was recorded in Dave’s basement when these guys were kids, and, sitting there next to Eddie, it was pretty cool just to go through that journey,” Shanks said last week by phone from New York. “And then when the sessions started just seeing how Eddie and Alex play together — there’s such a synchronicity in their feel and rhythm and their playing. There were times, honestly, I was just moved by it, not just as a musician but as a human being. The nuances of the way they communicate is staggering.”

The fan reaction to the album’s first single, “Tattoo,” has been mixed, but Roth and company know that the tour (which includes shows in Los Angeles (June 1) and Anaheim (June 12) will be the true proving ground for them.

Roth, who has short hair now and a lean physique earned with decades of martial arts training, displayed a few of the dance moves he’s been working on for the show. In his earth-tone overalls and cap he looked more like a Venice Beach mime than a rock star, but he still has a shark smile. What exactly drives him isn’t easy to glean — does he have the same dark engines as Eddie Van Halen?

“You’re asking for a lot of introspection here,” Roth said. “Nobody well adjusted ever got my job, much less kept it this long. There’s some grasping drive, and it precludes self-satisfaction…. You’re always questioning.”

As for his old friend and rival, Roth smiled and gave the world a bit of fair warning about the reclusive guitar hero. “There’s an old Russian saying: ‘There’s no more lines in that guy’s stomach.’ It means somebody got fat and slow. There are still a lot of lines in Eddie’s stomach.”