What a GREAT SHOW!!! Although it was mega hot and sticky and it rained for about 1/2 the show we all enjoyed ourselves a lot! I wish Paul would have gone a lil lighter on some of the newer and less popular songs, but the second 1/2 of the show the rain stopped and the hits kept flowing!!!! My cousin Frank and his family, who brought me and they are HUGE Beatles Fans! You could not ask for a better crew to see ANY concert with let alone Paul! My Franny did shed some tears during “Hey Jude”, Priceless! Thanks again Frank!

There was a guy we call “The McCartney Dancing Cowboy Dancing around the field the ENTIRE TIME! From the opening bands first song, until Paul’s last song! HE WAS AWESOME!!! I did make the comment he was “Mr Met” on his night off! I want to hire him for my next party!

I was happy to see Billy Joel make a cameo for “I Saw Her Standing There”! It kind of made up for the fact I did not get to see him close Shea! At one point a big tidal wave like splash came down from the roof! Paul said he thought he was going to stay dry and we are now all in this together! We sure are Paul! 🙂 GREAT SHOW!!! It was a long time coming, but it was an honor to see a legend, Sir Paul McCartney!

Here is a perfect article posted today in the NY Times, describing the show perfect: A McCartney Homecoming, at Citi Field

Paul McCartney came to Citi Field on Friday night to bring a new ballpark one thing that can’t be built in: memories. No one was better qualified.

As a 23-year-old Beatle, Mr. McCartney introduced rock to a stadium audience on August 15, 1965, when the Beatles played a 34-minute set at Shea Stadium, which Citi Field replaced. The Beatles returned to Shea in 1966 on what would be their last tour.

Mr. McCartney was also at the final concert at Shea Stadium, joining the headliner, Billy Joel, on stage last year. Mr. Joel returned the favor on Friday night, singing, whooping and splashing piano chords in “I Saw Her Standing There.” In case the Mets weren’t enough, now Citi Field has musical continuity.

On Friday night, Mr. McCartney reminisced about 1965, imitating the muffled and distorted sound the Beatles got through the old stadium’s P.A. system, which by all accounts was drowned out by screaming girls. (Nearly 44 years later, somewhat older women seized their cue to scream.)

He also had other memories: of his fellow Beatles John Lennon, to whom he dedicated his memorial song, “Here Today,” and George Harrison, who had given him the ukulele he used to play Mr. Harrison’s song “Something.” He dedicated the ballad “My Love” to his late wife Linda, who sang with Mr. McCartney’s band Wings in the 1970s; she was part of the video backdrop when Mr. McCartney played “Band on the Run.”

The Citi Field audience brought its own memories: Beatles T-shirts and talismans, held aloft to soak up the occasion. When Mr. McCartney sang Beatles songs, in arrangements that nearly replicated the studio versions, there were loud, fond sing-alongs.

But Mr. McCartney wasn’t fixated on looking back. Although he has enough hits to fill his two-and-a-half-hour set with oldies from Wings, the Beatles and his solo albums, he chose to stay current as well, stumping the nostalgia crowd with songs from the album he released in 2008 as the Fireman, “Electric Arguments.” At 67, he is still a vigorous musician: writing tuneful and wily songs, playing assorted instruments, crooning his ballads ardently, hitting the high notes and howling like a rock and roller.

Of course, Mr. McCartney wasn’t about to return to the primitive conditions of a 1965 Beatles show, when the band performed isolated on an empty ballfield with fans far away in the stands. (There was field seating, on covered turf, along with the stands at Citi Field.) Stadium concerts have evolved mightily, and Mr. McCartney had all the paraphernalia to make his music fill the stadium as the sound and image of the Beatles could not (which didn’t make the Beatles concerts any less exciting). Video screens rendered Mr. McCartney visible to the upper decks, and they illustrated songs like “Back in the U.S.S.R.” (with old images of Russia) and “Got to Get You Into My Life” (with the computer-animated Beatles from the video game “The Beatles: Rock Band”). Flash pots and fireworks blazed to underline the explosive transitions of “Live and Let Die.”

As always, Mr. McCartney was boyish onstage, making faces and tousling and re-tousling his hair. His genial and straightforward presence made some of his songs even more enigmatic, like “Jet,” “Helter Skelter,” “Flaming Pie” (the title song of Mr. McCartney’s 1997 album) and “Mrs. Vandebilt” (a song he resurrected from the Wings album “Band on the Run”).

Mr. McCartney performs like a musician cheerfully doing his job. He made no fuss over how many paths he opened with the Beatles and how much he can do. At Citi Field, the delicacy of “Yesterday” and “Blackbird,” the near-gospel of “Hey Jude,” the mandolin-strumming skiffle of “Dance Tonight,” the quasi-classical string parts of “Eleanor Rigby” (digitally simulated) and the lusty blues-rock of “Let Me Roll It” were all part of Mr. McCartney’s music, and all performed neatly and deftly. Mr. McCartney keeps his songs familiar; his band members barely deviated from the solos played by the Beatles and Wings. So when Mr. McCartney did make changes, they were striking — particularly when he segued from the middle of “A Day in the Life” into “Give Peace a Chance,” with a peace sign on the video screen and the crowd raising two-fingered V-signs while singing along. 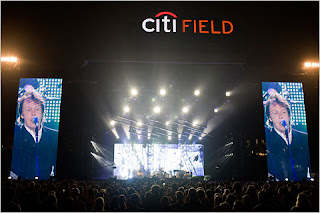