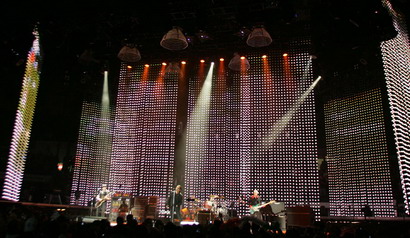 As many of you know, I am a HUGE U2 fan! Opening night on any U2 tour is always huge and it was good to see the boys out on the road and the show looks better than ever! Here is some of the details and some shots! 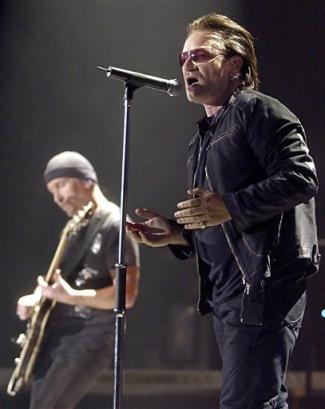 Main Set: City of Blinding Lights, Vertigo, Cry – The Electric Co., An Cat Dubh / Into the Heart, Beautiful Day, New Year’s Day, Miracle Drug, Sometimes You Can’t Make It On Your Own, Love and Peace or Else, Sunday Bloody Sunday, Bullet the Blue Sky / Hands That Built America, Running to Stand Still, Zoo Station, The Fly, Elevation Encore(s): Pride, Where the Streets Have No Name, One, All Because Of You, Yahweh, 40 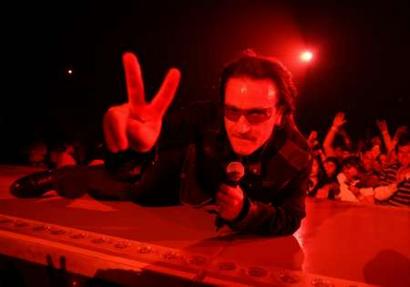 Comments: Opening night of the Vertigo 2005 Tour begins with confetti falling around the full stage as Bono sings ‘City of Blinding Lights’ from out at the edge of the ellipse. He adds a bit of ‘Stories for Boys’ to ‘Vertigo’, and a bit of ‘Blackbird’ on the end of ‘Beautiful Day.’ Larry helps sing during ‘Elevation’ and plays keyboards during ‘Yahweh.’ The concert ends with a full version of ’40’ just like the ’80s, with each band member leaving the stage separately and a brief drum solo ending the show. 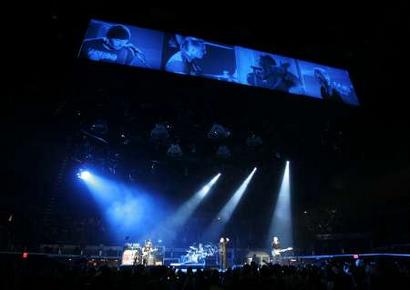 U2 on tour at U2tours.com 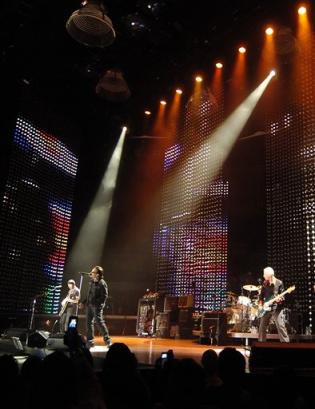 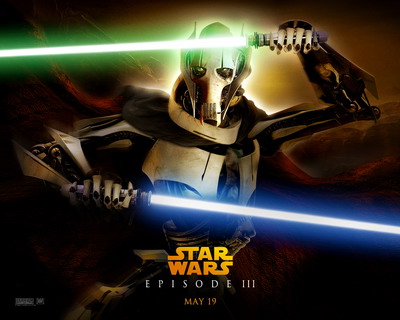 Guest Blogger Chris Vergari posting for me on the Star Wars Mania thats been kicking in the last few weeks! I am looking foward to the new games including the Star Wars Lego video games! Where the hell was that when i was 12!- Thanks pal good work!

Well there’s only 52 days left until the final episode of Star Wars premieres. And it looks like George Lucas will finally give the fans what they’ve been asking for in a Star Wars film. After the less than admirable feelings towards episodes I and II, this one should not disappoint, I hope.

By now, many have seen the Revenge of the Sith trailer and as with the trailers for The Phantom Menace and Attack of the Clones, it looks killer. But of course there was always something missing from the previous two that we get in Episode III-DarthVader. Yes we had R2D2 and Yoda, we even had a naked C3PO. But seeing Darth Vader again just brings the whole Star Wars experience full circle. When he spoke for the first time with his old familiar James Earl Jones voice in the teaser trailer seen some months ago, I was instantly transported back to the original trilogy from 1978 when I was 8 years old, and yes it gave me goosebumps. Now that I’m almost 35 with kids of my own (they’re a little young for Star Wars but you can bet that when they’re ready I’ll be whipping out the DVDs) it’s like the whole saga is finally coming together. And with the Clone Wars Cartoons (part one just came out on DVD and you can see part two currently on Cartoon Network), we get to see what happens during the Clone Wars that began at the end of Attack of the Clones and are ending at the beginning of Revenge of the Sith. They are very well done and worthy of the Star Wars name. They provide a seamless link between the 2 movies, I’d recommend seeing the Clone Wars series before seeing Episode III instead of relying on the opening crawl to catch up on what’s been happening since Episode II. Yes it’s a good time to be a Star Wars fan.

Sorry, I took a lil spring break from my site and from my blog 🙁 , But I am back and ready to post! I have had SEVERAL complaints I have not been posting, 🙂 So that is ggod! 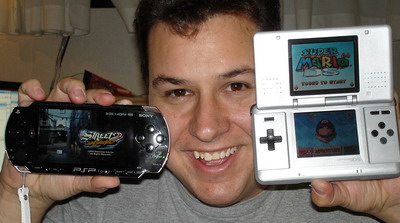 The US release of the PSP (That is Playstation Portable for those not in the know) hit pretty big on Thursday! NO I did not get one (yet hehe) but the kind Chris Lee came over Monday with his! I really got to feel what it weighed because the battery was in this one, unlike the one I saw in Japan, it was in English! Always a plus! I am sad to report, although I am still in love with the PSP, odds are I am probably not getting it anytime soon 🙁 Grant it, it is a great game system! I tried out the mp3 part of the system looked pretty cool and tried 2 games, NFL Street 2 and NBA Street Showdown. They both looked pretty cool and Spiderman 2 looked amazing on it, but I will NEVER have time to play it, so I will hold back all my gadget temptations and wait it out 🙁 (I still had to get my mug on the site with Lee’s PSP and my DS just to compare the two!) I am still kind of disappointed in the lack of games for the DS! A few more came out but I still can’t find a second game I want play 🙁 O well! More posts to come including some back posts with my adventures from Japan! 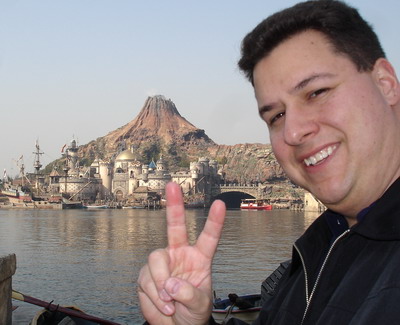 Just got back from Tokyo DisneySea. The name is is kind of deceiving because it is not like a Sea World and has no living animals in the park. It is kind of along the lines of a Islands Of Adventure, where different ports have different themes and rides. It is kind of small, and does not have that many rides, but the pure spectacle of it all and the scenery is truly amazing! The volcano alone is worth the trip. It is huge and takes up a good chunk of the park! It erupts every 1/2 hour and its really cool. Of course there is a ride in there. I will go more in depth about both parks soon, but here is my picture gallery to keep ya busy 😉 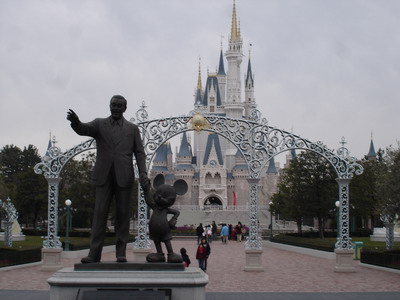 Went to Tokyo Disneyland! WOW It was amazing! I really had a good time and was not upset at the Japanese language. They mixed it up a lot of times and made it easy to enjoy everything. The park was packed and 98.5% of the people were Japanese 🙂 They enjoy different flavored popcorn the most! I loved the Buzz ride, which is different then the US version and really loved the Castle Tour and the Winnie the Pooh Ride! Check out the pics! I will be blogging more soon don’t you fret!

I will be adding more when I wake up! I am BEAT 🙁

Went to the Sony Building today! It was so awesome! I saw the PSP, truely an amazing toy! Can’t wait for it in the states! Light in weight, Killer Display and the graphics are AWESOME! More Later! 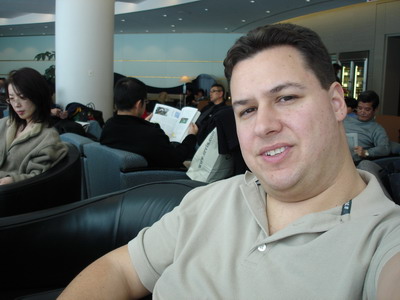 WE MADE IT! Checking in from the hotel the first night of our trip! Things actually worked out well with the snow storm in Jersey! We really got lucky after waking up to the snow stopped! We headed out to JFK and things were smooth! It only took us an hour to the airport and non of the flights were delayed! 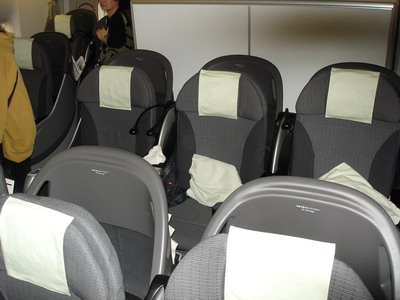 JAL (Japan Airlines) really rocked! The seats are pod like shaped and were very comfortable. We watched Ray, Princess Diaries 2 and Sky Captain ATWOT, all pretty good movies! I slept a lot of the time and the food was great! The flight flew up over Canada, over Alaska and finally over the Pacific Ocean. It really was a super smooth flight and the way it was executed, it felt like a 4 hour flight. A very cool thin I never saw on a plane was it had a camera mounted in the front and you can see it take off and land, truly incredible! 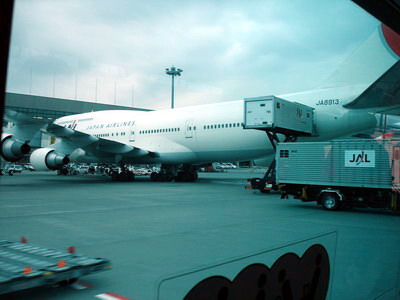 We got off the plan and got right on a shuttle! It takes like 2 hours to get from the airport to Tokyo. We passed Tokyo Disneyland and saw the Castle and Space Mountain from the road! I was really surprised because even in Disneyland now you cant see any of the park from the major highways! It is around an hour away and I hope to go there next Wednesday. 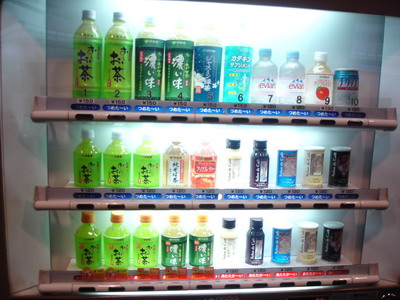 The hotel we are staying at is nice. It has a nice view of Tokyo. Its almost midnight on our first day and I think I am going to crash. I am off to probably the Sony Museum and don’t know what else but ill be checking in. I am online like 9am Eastern Time and Probably 4pm , so sign on AIM and say Hi!