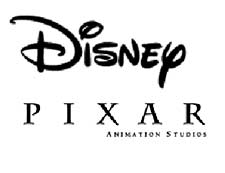 November 9, 2005 – Nearly two years after Pixar topper Steve Jobs first announced that the CG animation studio was parting ways with Walt Disney Pictures, the entities appear poised to kiss and make up. During a recent third-quarter earnings conference call, Jobs was hopeful about renewing relations with the House of Mouse.
‘We are in deep discussions with Disney,’ he said, noting that that they’d like to have a new distribution deal in place as soon as possible. ‘It’s worth the few extra months of effort if there is a chance of continuing our relationship with Disney and our discussions right now are very productive,’ said Jobs.

That’s a completely different tune than the Pixar CEO was singing back in early 2004 when then-Disney honcho Michael Eisner refused to meet the terms demanded by Jobs for a new Pixar distribution agreement. Pixar reportedly wanted 100% of the box office take on future films, a modest distribution fee and the lion’s share of ancillary revenue. Eisner balked.
Things have warmed between the companies since Eisner’s departure and serious talks restarted after his successor Robert Iger was put in place.

The box office success of Chicken Little may give Disney a little better footing, proving that they’re not completely hosed without Pixar’s brand of computer-animated movie magic. But Pixar isn’t in a bad way either, the studio’s earnings rose 22 percent last quarter on robust home video sales of prior releases like Finding Nemo and The Incredibles.”

Pixar’s initial focus was as a high-end hardware company- They produced a visual processing computer, which primarily sold to government agencies and the medical community. The machine required a computer built by Sun Microsystems to operate. While the machine never sold well, John Lasseter began creating short animations to show at SIGGRAPH to demonstrate the power of the system. These animations, such as Luxo Jr. impressed audiences at the show because they demonstrated not simply a raw rendering, but personality.

As poor sales of Pixar’s computers threatened to put the company out of business, Lasseter’s animation department began selling commercials to outside companies. After substantial cuts to most of the computer department, Pixar began it’s current life by making a $26,000,000 deal with Disney, to produce Toy Story.

Disney & Pixar
All of Pixar’s major features thus far have been made in collaboration with Walt Disney Pictures; Pixar handles all of the production aspects whereas Disney handles all distribution aspects. In 1997, after the release of their initial film, Toy Story, both companies signed a 10-year, 5-picture deal, in which the two companies split production costs and profits — with Disney receiving 12.5% of the revenues and the rights to the films. The arrangement has been very profitable for both companies, as Pixar films have been far more successful than Disney’s own animated films. Pixar’s five feature films have grossed more than $2.5 billion, making it, picture for picture, the most successful movie house of all time. However, Disney’s CEO, Michael Eisner, and Jobs did not get along. Because of personal and business disagreements, the relationship will end in 2006 with the movie Cars being the last joint venture between the two companies.

The two companies attempted to reach a new agreement in early 2004. For the new deal, Pixar only wanted to pay Disney a distribution fee with no other profit sharing or rights to the properties. This was unacceptable to Disney, but Pixar refused any concessions. Pixar is currently looking for a new company to distribute its films, and many other firms are eager suitors. Disney retains the rights to the earlier films and can make sequels to them. It has begun production of Toy Story 3, without Pixar’s involvement. 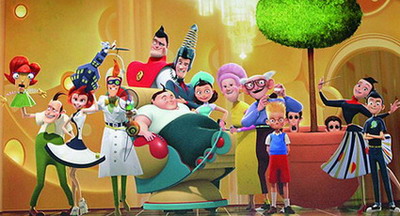 Why do I torture myself? Just when one wait is over, I discover another new one 🙂 I just stumbled apon Disney’s next new movie, Meet The Robinsons! Looks Killer!

– Disney has given the world its first look at their new animated feature Meet the Robinsons. The picture above shows the animated cast of the film, based on William Joyce’s beloved 1990 book A Day with Wilbur Robinson. In the tale, Wilbur is a boy genius who creates a fantastic Jack Kirby-esque machine which ends up unlocking time, allowing Wilbur to visit with a future whose survival depends on him. 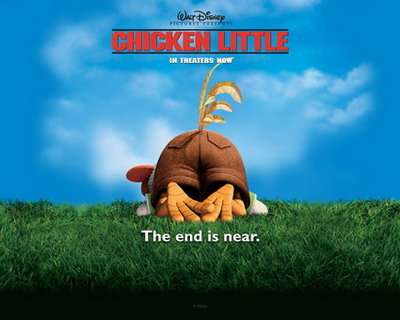 … and its about time! I have waited for the latest Disney movie for what seems like 2 years! They had bumped this movie back and delayed it so many times I am glad to finally see it hear! I hope to see it over the weekend. It go some so so reviews, so we will see how it does. This is Disney’s first REAL computer animated movie without Pixar, so the pressure is on! I believe Dinosaur was also computer animated, but it didn’t do so hot 🙂 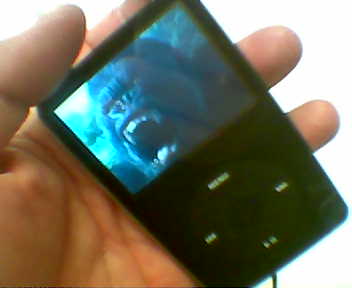 I got my lil mitts on the latest 5th generation ipod with video! I must admit, it is really really nice! Its a lot smaller than I thought it was going to be and everything I expected. The screen is real nice in color and very smooth interface! I am totally not used to for one thing color and photos let alone streaming video on an ipod! They had 2 videos on the ipods to demo. A preview of the new movie Curious George and the trailer for King Kong! The video played real smooth and it sounded amazing on those Bose headphones they always push 🙂 It is a MUST HAVE gift for me this Christmas and I am looking forward to getting the 60 gig 🙂 I am actually GLAD I did not buy the ipod nano and held out for this bad boy!

Speaking of King Kong, you MUST go to the Apple site and check out the new 2 plus minute, making of video they have on there! The movie looks AMAZING and I am really looking forward to it! 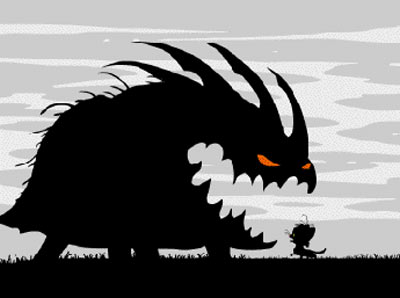 Very Cool Animation! Check it out!

– The ever-innovative Michel Gagné has posted the twelve INSANELY TWISTED SHADOW PUPPETS interstitials and bumpers that he created for Nickelodeon’s “Halloween Shriekin Weekend.” They are short but ingenious pieces of Flash animation. Michel’s kinetic, in-your-face style of timing and animation creates an energetic mood unlike any other animated film I’ve seen recently. As part of his contract with MTV, Michel wisely negotiated that he be allowed to show the unedited spots on his website, and these “Director’s Cuts” versions currently on his site differ significantly from what aired on Nick.