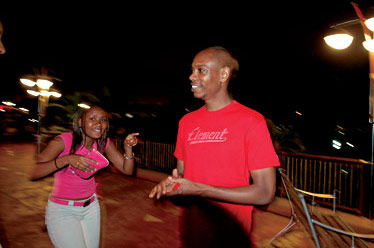 Was wondering, what the hell hgappened to Dave Chappelle? My buddy Joey has been a huge fan of his for a long time and we had a running joke going where I would be like, who’s Dave Chappelle? Was funny if you were there, but I soon found out who the man was. I kind of feel sorry for him, but at least he gets to tell his side of the story. Read on.

The first thing Chappelle wants is to dispel rumors—that he’s got a drug problem, that he’s checked into a mental institution in Durban—that have been flying around the U.S. for the past week. He says he is staying with a friend, Salim, and not in a mental institution, as has been widely reported in America. Chappelle says he is in South Africa to find “a quiet place” for a while. “Let me tell you the things I can do here which I can’t at home: think, eat, sleep, laugh. I’m an introspective dude. I enjoy my own thoughts sometimes. And I’ve been doing a lot of thinking here.”

The picture he paints—and it seems a fairly honest and frank assessment— is of someone struggling to come to terms with a new position and power who’s still figuring out how to come to grips with how people around him are reacting to the $50 million deal he signed last year with Comedy Central. Without naming specific characters, he seems to blame both some of his inner circle (not his family) and himself for the stresses created by last year’s deal.

“There were things that overwhelmed me,” he says. “But not in the way that people are saying. I haven’t spent any of the money. All that stuff about partying and taking crack is not true. Why do I live on a farm in Ohio? To support my partying lifestyle?”

TIME.com: On the Beach With Dave Chappelle