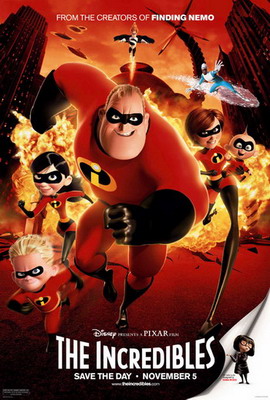 WOW what a great opening weekend! The movie was AWESOME! I actually have seen it TWICE already! I highly recommend the Sony / Lowes Theater in New Brunswick!

When a movie comes along I really want to see, I generally do not read much about it, read reviews or really explore much about it. Going in and seeing the movie, I was very surprised about it. I did hear it was a longer movie, coming in at 1 hr 45 mins and the movie was longer than most animated films. It also to me didn’t seem too “kiddie” and was very sophisticated. Also, humorous at times wasn’t as much a comedy as was an adventure movie. I loved the story line and the details and scenery of the film.

I will not give any spoilers, but it is up there with all my favorite Pixar movies! The computer animation was amazing. This is the first time Pixar has had humans as the main characters and not toys, monsters, bugs or fish 🙂 Although they were artistic looking, the detail was amazing! I thought seeing it in the movies, Mr. Incredible looked a lot like a juiced Jay Moore.

The hair on the characters came out amazing. In the past, humans were a huge problem including hair and fabric on costumes. In The Incredibles, they really got it down. On the website, the making of the movie showed how they overcame all the obstacles of these human characters. I really enjoyed the voices of the characters and think they did a great job as usual. OK I am going to watch some more Pixar movies! 🙂

I am also playing The Incredibles game for PS2 still and it ROCKS! I recommend that too!