Another kind of mellow day. After our late night last night we slept in pretty late. Today was finish up day. Anything we wanted to do, Francesco offered to take us too. We pretty much drove in and took a bus right from the start of the city.

Our first stop was the holy steps. They are inside a church where there is to be said is the blood of Jesus on the stairs. People walk up the stairs on their hands and knees. 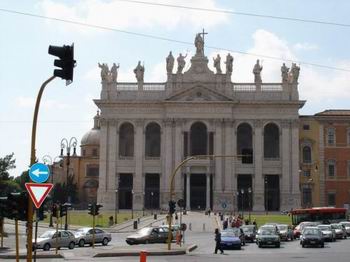 Then next door we visited San Giovanni “Mother Of All Churches”. This was the chief papal residence until 1309.

We then jumped back on the bus and headed towards the Coliseum. 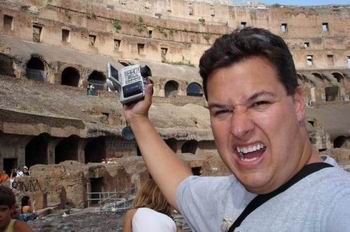 Pino and I ventured in with no line today, so we got in real easy. This was definitely one of the main highlights of the trip. It was really tough to get a grip on the magnitude and the size of it. 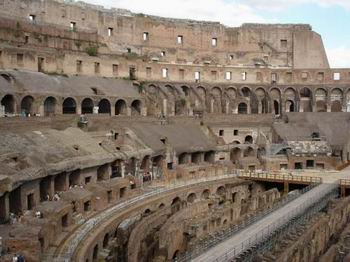 I read it held 55,000 people, from the inside you can see how it did. I bought a book and there was a shot of Gladiators fighting all these wild animals. I commented later to Pino that they just do not do that anymore hehe. I was amazed to learn that in a lot of places including the Coliseum that the would flood the place and stage mock navel ship battles amazing. 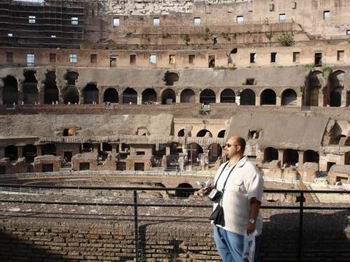 From the very first time you walk in to going up to the second level, you see a whole new perspective on the place. Looking down you can see into the labyrinths and corridors that the gladiators and animals were kept. I had majestic music going through my head the whole time. It was the type of music that the play for action movies. Of course we went around and I took a ton of pictures and video. We we went up to the second level, the stairs were very tall and steep. The views looking out to the Palatine Hills were truly amazing as well. It was really great to see a lot of the stadium was well preserved. 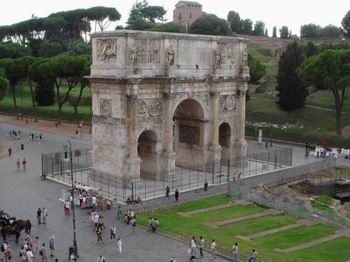 I saw a lot of Roman Columns and in the early 1930s the rebuilt a section to show people how a section looked. 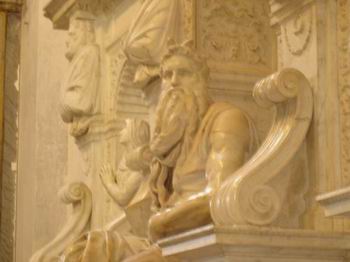 We then headed off to see Michelangelo’s Moses. The funny thing is half the time I did not know where a lot of the things were and with the language barrier, a lot of the times I did not know what was going on until we got there. It wound up not being in a museum but in a church, San Pietro in Vincoli (St. Peter in Chains) a church to house the chains that bound St Peter in Palestine. That was not our focus though, Pino’s last mission was to see the statue of Mosses as our guide Francesco told us one of the best statues in the world along side of Pieta and Michaelangelo’s David in Florence. It was a great statue that was off to the side and was part of a wall piece. I love the stories about Michelangelo’s pieces. This story said he was to carve 44 figures but did not get done. Instead the Pope was given a masterpiece. Also there is a self portrait of Michelangelo in Mosses beard. Also we were told that the Pope did not like the piece and in anguish he threw a hammer at Mosses and hit his knee leaving a mark on the perfect statue. A very amazing piece. We found it funny that you can pay 50 cents to light up the subject.

Q: Why does Moses have horns on his head?

A: Michelangelo’s “Moses” has horns because one of the biblical translations of “rays of light” became “horns” in Italian. Because of this mistranslation, depictions of Moses with horns became somewhat commonplace. 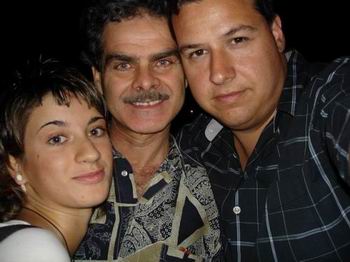 We then headed back and went to dinner with the whole gang. 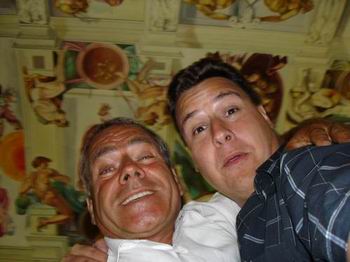 Not The Real Thing!

Every day in Rome was a great day and it was good to celebrate one last time with the whole family. 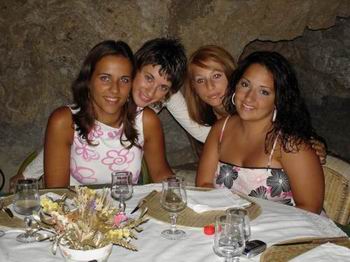 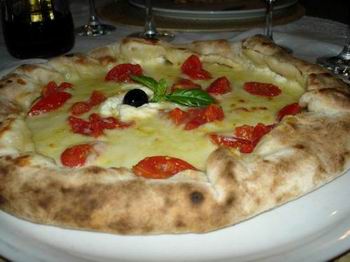