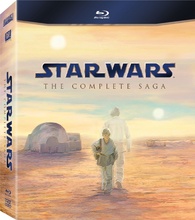 No, the “untouched” original trilogy is not included. Yes, there are some goofy new additions, like Darth Vader yelling “NOOOOO” as he throws Emperor Palpatine over the railing. I don’t think anyone expected this release of The Complete Saga to be free of controversy. But come on. It’s Star Wars. On Blu-ray. This is a once-in-a-technological-generation event, and if your hatred of George Lucas’ revisionist tinkerings keeps you from enjoying some of your favorite films in high definition, you’re missing out. Believe me, I share your pain. Whenever I hear that stupid funk song inside Jabba’s palace, I cringe like a man being forced to bite down on tin foil or chew sand. It’s almost physically painful. But I’m done being bitter. I’m playing the long game. One of these days, Lucas will wise up and realize that the original trilogy—in its original form—is a culturally and historically important piece of pop art that belongs to its fans. But until that day, I’m going to enjoy this Blu-ray box set. The films have never looked or sounded better— Episodes III-VI are particularly impressive—and they come with a fantastic collection of special features. Highly Recommended!