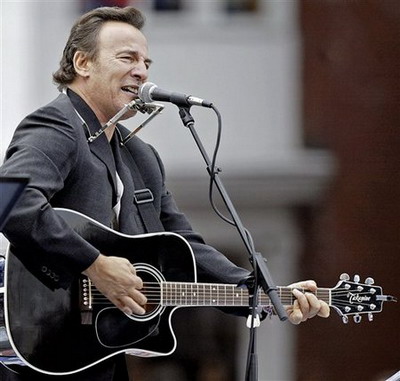 NEW YORK (AP) – Bruce Springsteen wraps up his second solo acoustic tour by going back where it all began: New Jersey.

The Rock and Roll Hall of Famer plans shows in the Boardwalk Hall in Atlantic City, the Sovereign Bank Arena in Trenton and the Continental Airlines Arena in East Rutherford, N.J. as part of a 17-city swing. The Garden State shows are the last dates supporting his “Devils & Dust” album; the tour began April 25 in Detroit.

The first show in the third leg of the tour is set for Rochester, N.Y., on Oct. 6. Springsteen, over the course of these shows, has performed 115 songs from his three-decade career.

The three New Jersey shows are scheduled for Nov. 13 in Atlantic City, Nov. 16 at Continental Arena, and Nov. 21 in Trenton.

In a July interview with The Associated Press, Springsteen said he’d enjoyed reinterpreting everything from his new material to reinvented old favorites to rarely heard obscurities.

“I’m in search of how to take the stuff I’ve written and make sure the audience hears it fresh again,” Springsteen said. “It’s been a lot of fun. I’ve enjoyed it.”

All arena shows will be played in spaces modified to a theater format. There was no immediate word on availability of tickets.