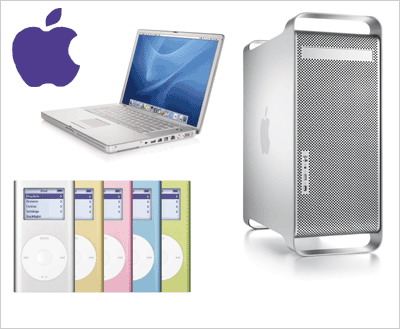 People are anticipating a HUGE announcement from Apple on Wednesday! With the mighty mouse coming without any warning, I am really waiting to see what this announcement is! Every time they scooped something big in the past year or so since I have been following the Mac world, I always new what the announcement was going to be. This time I have some idea they will announce like a new Ipod or something, but I can’t wait to see what its gonna be! By the way, I am still loving the Mac, but I have little time to learn a lot of the cool programs!

Apple is preparing a major announcement next week, dropping hints of something as critical to the company’s future as the release of the original iPod in 2001.

The company sent an invitation to reporters on Monday morning for a “special event” being held on 7 September in San Francisco.

The invitation reads: “1,000 songs in your pocket changed everything”, referring to the release of the first 5GB iPod nearly four years ago. “Here we go again.”

As with any planned announcement from Apple, details are scarce and rumours are running rampant. However, some potential clues have emerged.

Record company executives have said recently that Apple has been seeking licences to distribute a wide variety of music videos through the iTunes music store, and that the computer company has told them of plans to unveil an iPod that plays video.

Research firm iSuppli recently reported Samsung Electronics was dedicating a large amount – perhaps as much as 40 per cent – of its flash memory production to Apple, leading to speculation that the Mac maker was preparing a larger-capacity version of its flash-based Shuffle player, or even switching its iPod Mini to a flash-based technology.

Apple sold 6.1 million iPods in its last fiscal quarter, and the company has ridden the demand for the music player to its strongest financial position in years.

Other Apple-linked products are also nearing market release. Motorola has said a long-promised iTunes mobile phone will ship before the end of September. And the latest version of iTunes, version 4.9, contains hidden references to mobile-phone features, adding to the expectation that an iTunes-compatible mobile phone is coming soon.

The Federal Communications Commission has granted regulatory approval for Motorola to start selling one iTunes-capable phone, although it is not certain that handset will be the first model Motorola introduces.

Jupiter Research analyst Michael Gartenberg cautioned against expecting anything too far out of Apple’s existing product line, saying that a video iPod is unlikely. The iTunes-compatible phone is a likely candidate, he said, but added that the company could have surprises in store.

“When it comes to Apple announcements, expectations are often set unrealistically by Apple enthusiasts. But Apple has been known to pull rabbits out of the proverbial hat. It may be a new category of device altogether,” he said.