As many of you know, I am a HUGE fan of Sony! Last year at E3, I was told “2005 is the year of the portables”! Not only did the new Nintendo DS kick ass, Sony announced today the official release date of the PSP! This unit looks incredible! I hopefully will get my hands on the first um MILLION units ready to go for its March 24th release day! Looking real forward to its future potential and all the cool stuff it can bring to the table! 🙂 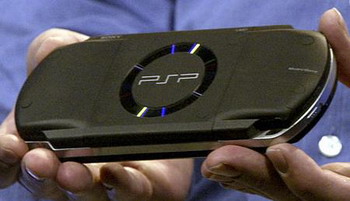 Kaz Hirai, president and chief executive officer of Sony Computer Enterainment America Inc., holds a PlayStation Portable, known as PSP, during a news conference in Los Angeles Tuesday, May 11, 2004. Sony Corp. said Thursday, Feb. 3, 2005, it will release the PlayStation Portable in North America on March 24 and have 1 million units ready for sale in the first week.

Sony Corp said Thursday it will release the PlayStation Portable in North America on March 24 and have 1 million units ready for sale in the first week.

The PSP machine, a challenger to Nintendo Co.’s long-standing grip on the handheld video gaming market, will be sold as a “value pack” for $250 in the United States and for $300 Canadian dollars. It will include numerous accessories and – for the first million sold – a copy of the “Spider-Man 2” movie on the new Universal Media Disc format that Sony designed for the PSP.

The PSP is designed, however, with more multimedia features. It can play digital music, movies and display photos on its 4.3-inch color screen, using Sony’s proprietary 1.8-gigabyte UMD discs or a Memory Stick.

In addition to working with its own Sony Pictures film division, Sony is in discussions with other movie studios to support the new UMD format for future releases of movies, Hirai said.