Sideways took the highest honor at the SAG awards last night! This is a huge accomplishment against all the other favorite movies for best ensemble acting. These awards, along with the Golden Globes is a good trial run for the Oscars! As my bud Mike Delin mentioned in his blog, we have talked about this over the years, the Oscars is like the Super Bowl for us 🙂 I did enjoy Sideways. It was a lil strange because they are way into wine, but once you get past that it was a great movie! I also loved Virginia Madsen and find it funny that she is FINALLY getting critical acclaim in Hollywood! Million Dollar Baby did real well and it is confusing who will do good at the Oscars! We will see. 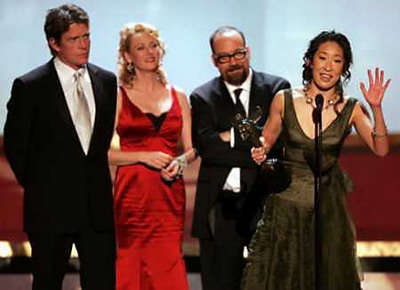