A Spin Off! hehe Too Classic! Usually these straight to DVD movies stink, but we will see 🙂 – Hey, People LOVE that cat! hehe – Thanks Chris for the article. 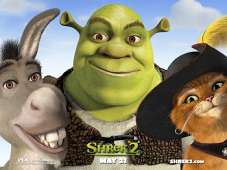 DreamWorks is moving forward to give Puss-in-Boots, the sword-wielding cat voiced by Antonio Banderas in SHREK 2, his own film project. The studio has hired screenwriters Ed Decter and John Strauss (THE SANTA CLAUSE 2, THE LIZZIE MCGUIRE MOVIE) to write the screenplay for the new CGI film, which DreamWorks is eyeing for a direct-to-video release. While no deal is in place for Banderas to voice his feline rogue in the newly announced project, it’s likely that the studio will be able to strike a deal with the Spanish-born actor; after all, his involvement with SHREK 3 is certain.

No details on the PUSS-IN-BOOTS storyline were made available

(if there any any at this early stage of the game.)

One Reply to “PUSS-IN-BOOTS The Movie!”