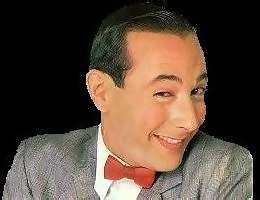 Yes He Is! I was a big PeeWee fan when I was a kid and thought Paul Reubens was an awesome actor. The movie rocked and it was also Tim Burtons first major movie. I guess Rubens was a twisted guy all along and dampened the Pee Wee Legacy, but hey as I always say time heals all wounds and not one but TWO Pee Wee movies are in the making! I linked a 35 minute audio interview and it is fascinating, enjoy! Keep in mind its an interview with Paul Reubens and NOT Pee Wee Herman! He is one of those who you get one or the other! THAT’S DEEP PEE WEE! Bring him on! 🙂

The complete 45-episode series of the TV show Pee-Wee’s Playhouse is now out on DVD. Reubens originally created the Pee-Wee character at the Los Angeles improv group called The Groundlings. Pee-Wee’s Playhouse went on the air in 1986. It ran on CBS for 5 years, garnering 22 Emmys.