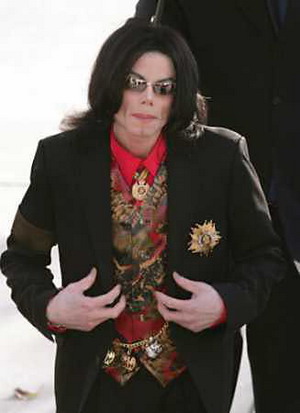 I’ll be honest with you, I am not buying it! 2 weeks in a row this trial has been postponed! I can’t wait till E!’s reenactments every night! The guy who was in Scary Movie 3 is doing them! Classic!

What’s next? Post your comment on this post! I think he is gonna ask to get permission to go to Tokyo Disneyland with me!!! :O SCARY!

SANTA MARIA, Calif. (Reuters) – Pop star Michael Jackson was taken to a hospital emergency room on Tuesday, vomiting and suffering from a “flu-like illness,” and his child molestation trial was abruptly halted. Jackson became so sick while en route to court in Santa Maria, about 30 minutes from his Neverland Valley Ranch, that he was driven instead to a local hospital. The sudden illness caught Superior Court Judge Rodney Melville and Jackson’s own lawyers by surprise.

“I did speak with Mr. Jackson by telephone this morning on the way to court and he said he was very ill,” lead defense attorney Tom Mesereau told the judge after a hushed conference with his colleagues. “I’m told he’s being examined by a doctor.” More than 100 jury candidates sat idle for over an hour while the judge conferred in private with prosecutors and Jackson’s attorneys and then, by telephone, with an emergency room doctor.

Melville emerged from his chambers to announce that the 46-year-old Jackson had been admitted to the hospital and would not be able to attend court until next week, bringing audible groans from some of the would-be jurors. Since jury selection began on Jan. 31 in the sensational trial, potential jurors have only been summoned to court on four days. Melville was forced to cancel the proceedings last week after Mesereau’s sister died.