Gotta Love Live Blogging! Ok so far they announced ITunes 5 and A Harry Potter ipod and are talking to Madonna, who is in the new ads for whatever they didn’t anounce yet! Check the link! Back Soon! 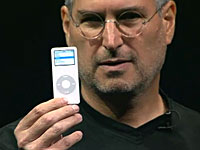 Their surver must be CRUSHED! It keeps going down! Here’s whats announced so far!

1:00pm – The lights are going down. Al Gore is reportedly sitting in the front row. Steve is on stage.

1:01pm – “Apple is leading the digital music revolution, but to us, at it’s core, it’s all about the music.” Steve introduces “16 time grammy award winner, the incomparable Yo Yo Ma” in the audience. “He’s mad at me now, probably.”

1:06pm – “This next statistic we’ve never shared with anyone before: we have just crossed 10 million accounts on itunes”. Average account has purchased 60 songs(mathematically that’s just # sold / # accts). “iTunes may be the second largest internet store behind only Amazon.” New exclusive content: Harry Potter. All 6 audio books only on iTunes.

1:07pm – New Harry Potter iPod – has the crest engraved on the back.

1:08pm – 1-click purchase of entire Harry Potter collection. Other exclusive: Madonna. All 15 albums available by album and by song. Steve is calling Madonna on iChat AV.

1:09pm – Madonna to Steve: “I got tired of not being able to download my own music.” Steve: “Do you have an ipod?” Madonna: “of course I do! that’s so dumb! Every time I get one a new one comes out the next week.”

1:11pm – iTunes 5! Pretty much same display, but cleaned up. Can organize folders of playlists.

1:14pm – Smart Shuffle feature. “We’ve had a lot of people say our shuffle’s not random” (laughter) “We’ve actually added Smart Shuffle to make it less random. But it seems more random.” From the UI: “Smart shuffle allows you to control how likely you are to hear multiple songs by the same artist.” Reviews added to iTunes.

1:17pm – iTunes 5 demo. Steve is searching for some musician named “Dylan” in the store. Results layout is more GUI, layout of album covers by artist.

1:20pm – Here it is: “There’s One More Thing about iTunes that we’re announcing today … Today we are introducing the iTunes phone: Motorola ROKR. 100 songs or other downloads.” 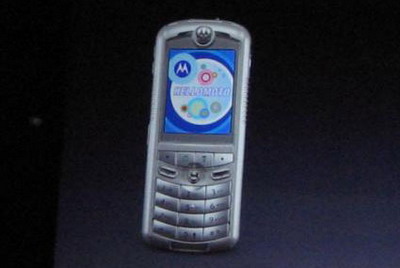 1:21pm – You load it via USB cable. “It’s basically an iPod shuffle for you phone.” No click wheel. It has auto-shuffle.

1:22pm – Steve is playing “Let’s Get it Started” on the phone. Sounds good – lots of bass. The ringtone is still cheezy, which makes a nice contrast of how much better the music audio quality is than you’d expect.

1:28pm – Sneak preview of TV ad. Madonna and a bunch of other people. Hey, there’s Iggy Pop w/o a shirt!

1:29pm – Steve onstage again: “The #1 wireless carrier in North America, Cingular, is going to be the exclusive carrier…”

1:34pm – Ralph says he knows we’re worried about battery life. He says he flew crosscountry with it yesterday, made some phone calls at his hotel, then left it on the table overnight. The battery gauge still showed full in the morning.

1:37pm – Magazine ads. “Elvis may have left the building, but now you can get him on the phone.“

1:41pm – “Now, I’d like to give you an update on iPod. Almost 22 million sold as of June. New automotive Made for iPod products: Honda, Acura, Audi, VW adding iPod capability. 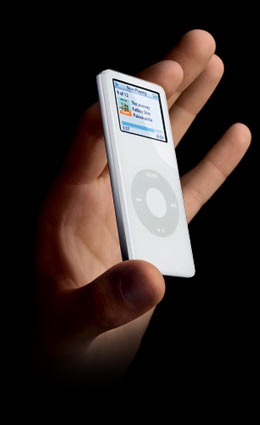 1:47pm – Steve is comparing the nano to other players and cellphones. 30-pin dock connector same as other iPods. Color screen.

1:48 – New clock, can add multiple time zones. They show inverse mode at night. Games, calendars, stopwatch, and lap timer. Screen lock with password. “If you have your contacts and calendars on, you might want to lock your screen”. “Some people are going to forget everything, so they’re going to forge they’re combination.” When you redock your mac opens the lock. 1.5 ounces, 42 grams. Less than 8 quarters. It fits in watch pocket of jeans. USB 2.0. 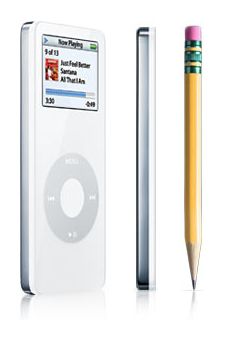 1:51pm – Shipping today. “They will be in some stores as early as tomorrow afternoon or Friday.” Accessories: $29 dock, $39 lanyard headphone. 5 armband colors $29.

1:54pm – “My prediction is this is instantly going to become the highest-volume most popular iPod in the world. At events like this, we always like to remind ourselves that the most important thing is the music.” So who’s the guest star? Kanye West, that’s who.

Well Its in the store and I already added it to my cart 🙂 I think I will hold back and wait till christmas though 🙁 Damn It! hehe BLACK BABY! 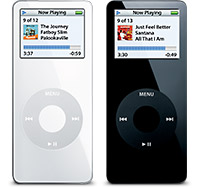