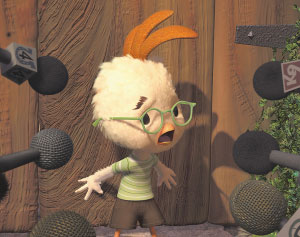 Pretty excited to see Disney’s first venture into computer animation on their own after the Pixar divorce 🙁 It looks pretty cool by the trailer! Lets just wait and see 😉 – Don Knotts is BACK!

A year after the notorious acorn incident, Chicken Little has less credibility in his hometown of Oakey Oaks — where bats sell eyeglasses, bulls run the china shop, and mice deal in cheese — than the boy who cried wolf. Disney’s upcoming computer-animated feature is the story of a child’s quest to regain the respect of his father and an entire community. Director Mark Dindal (“The Emperor’s New Groove”) calls it an “animal comedy with a big human heart.” Adds producer Randy Fullmer, “The animation is absolutely phenomenal.”

Combining Disney’s artistic heritage with 3-D technology, the film breaks ground for the studio. “Once in a while you recognize that you’re working on something really special,” says Fullmer. “‘[Who Framed] Roger Rabbit’ was like that. ‘The Little Mermaid.’ ‘The Lion King.’ ‘Chicken Little’ has that kind of magic.”

The movie drops into theaters in July, with the voice talents of Zach Braff in the title role, Don Knotts as Mayor Turkey Lurkey, and Joan Cusack, Garry Marshall, and Fred Willard.