Been real lazy this week! I find that the last 2 weeks of the year are virtually a waste, so I always like to chill and relax to end out the year. I saw Meet The Fockers, The Aviator, Oceans 12, The Bourne Movies and Saving Christmas! What a week! Disappointed in Meet The Fockers, Quite frankly, it wasn’t that funny and didn’t match up to the original. The Aviator was pretty good, long and not much of a payoff, but was worth seeing. Same thing as Oceans 12, was ok but not nearly as cleaver as the original! I love the scene when the go to the spot in Italy where we were! THEY LITERALLY WALK OVER WHERE WE SAT AND SOAKED UP THE SUN! 🙂 The Bourne Identity and Supremacy were pretty good movies! I finally caught up and saw them and worth seeing. Shockingly, Saving Christmas was not that bad. Jos being the big Ben Affleck fan, we had to see it. Not the best, but hey for a rental. not bad. I must admit I never saw a movie come out in theaters in October and hit the video stores not like 90 days later! 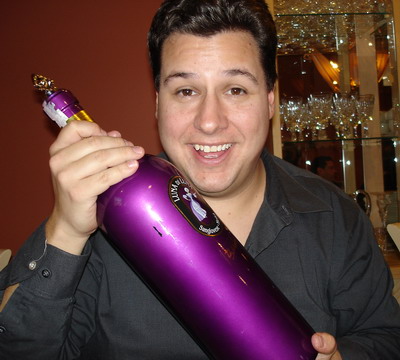 What A Bottle Of Wine! 😉

What a year! Orlando, LA, Houston, Wildwood and Italy! Baseball alone, I had my first trip to Yankee Stadium and with Boston winning the World Series, Baseball was amazing this year, what a ride. There are a ton of things to look back on and it was a truly great year with my wife and I. Thanks again to all my friends and every one who reads my Blog 🙂 The Nintendo DS Rocks! Don’t know if I mentioned it, but I LOVE IT! Got to play with it a lil 🙂

2005 looks very promising!!! Many new things going on and already two trips planned to tag along with Jos, Orlando again and Japan!!!

Have a safe and Happy New Year And be carefully out there!