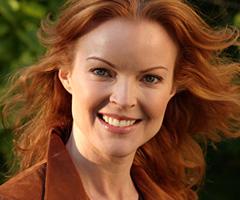 Im confused?!! I think she is too 😉 What the hell is the deal here!

Desperate Housewives star Marcia Cross has denied reports she’s gay.
Rumours about her sexuality circulated when American tabloids reported she was planning to pose for gay magazine The Advocate reports IMDb.com. The actress’ publicist insists the rumours are ‘completely untrue’, but stipulates Cross is ‘very supportive of the gay and lesbian community’. Cross said: ‘It was very odd and I assume this is what comes of being 42 and single. I don’t know if they just needed to find a reason why I wasn’t married. I mean, I’m not gay. ‘I did think it was really weird that there was all this curiosity about something like that, about sexuality. I thought, ‘What a world we live that that’s so important.'”