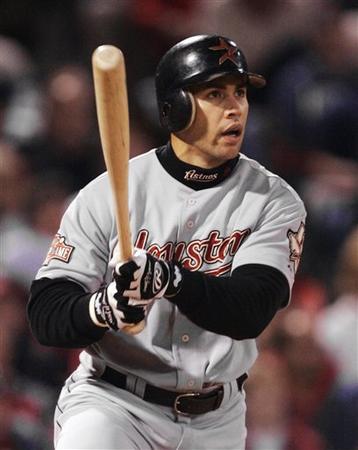 Are the Mets actually making good moves? Will they get one of the Astros Killer B’s 🙂 I remember seeing him during the World Series and hearing about him at the All Star Game in Houston! Very excited and hey may watch and even go to a few games this year 😉 Hopefully the Yankees won’t step in and blow the deal!

NEW YORK (AP) – Carlos Beltran is on the verge of following Pedro Martinez to the New York Mets.

A day after the All-Star outfielder let the deadline to re-sign with Houston pass, the Mets worked Sunday to structure a $119 million, seven-year contract that will include an $11 million signing bonus, a lawyer involved in the talks said on condition of anonymity.

The Mets, who haven’t made the playoffs since 2000, just last month lured Martinez from the Boston Red Sox with a $53 million, four-year deal. They declined comment on their talks with Beltran.

New York and Beltran’s agent, Scott Boras, spent Sunday negotiating the salaries for each season, the amount of deferred payments and the schedule of when the money will be paid, the source and another person involved in the talks said, also on condition of anonymity.

They hoped to reach a preliminary agreement on the specifics of the contract by Sunday night, have Beltran come to New York for a physical Monday and announce the deal Tuesday – the last day before a change in federal rules makes signing bonuses subject to increased taxes.

Across town, the Yankees planned to announce their acquisition of Randy Johnson on Tuesday, too. The Big Unit also was to have his physical in New York on Monday, the last step needed to finalize the drawn-out trade talks for a deal in which the Yankees will send to Arizona pitchers Javier Vazquez and Brad Halsey, catcher Dioner Navarro and $9 million.

Beltran, who helped Houston come within a victory of its first World Series last year, will became the 10th player in baseball history to agree to a deal worth $100 million or more – and the first since Jason Giambi got a $120 million, seven-year contract from the New York Yankees in December 2001.

Houston offered a guaranteed $100 million, seven-year contract, which included a $14 million option for 2012 with a $2 million buyout, an Astros executive said Sunday on condition of anonymity. If the option were exercised, the deal would have been worth $112 million over eight seasons.