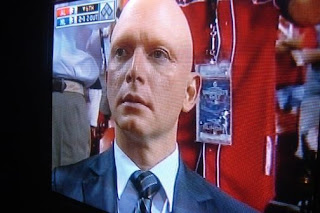 Many emails littered our inbox last night night asking about the weird bald-looking dude who received an uncomfortable level of face-time during the All-Star game. Of course, this is a sneaky Fox promotion for a television show. I guess we’ve fallen for it as well since I’m now writing about it. But here’s the WIkipedia info on “The Observer”:

The Observer is also seen on occasion in other Fox programs. For example, on April 7, 2009, the Observer was seen on American Idol. He was on the front row and blatantly shown near the beginning of the episode. This appearance, along with others at televised sports events, including a close-up appearance at the 2009 Major League Baseball All-Star game, is part of a viral marketing campaign by Fox Television