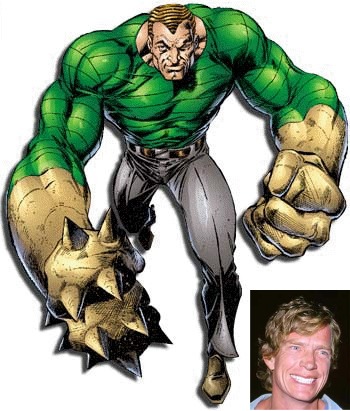 Thomas Haden Church, once rumored to be playing Chameleon in Spider-Man 3, will in fact play Sandman, and Topher Grace will be Venom. Since this news comes to us straight from the loose lips of Kirsten Dunst herself (who is wisely riding this money train as long as she can), I think we can put the rumor mill to bed on this one.

For those of you who, like me, are sadly unfamiliar with all of Spidey’s enemies, Sandman is a career criminal whose irradiated body can turn into a sand-like substance. Sand-like, huh? I was hoping he just had, like, a really abrasive personality, or something. Damn. Venon, however, is a bit more complicated. As far as I can tell, he’s (it’s?) some sort of alien thing that takes over bodies. When he moves into the body of Eddie Brock, a guy who really, really hates Spiderman already, Venom makes him stronger and more pissed off, creating a supervillain that looks like a black-and-white version of Spider-Man with a wicked smile. Well that sounds sort of awesome. It will be released in Spring 2007.