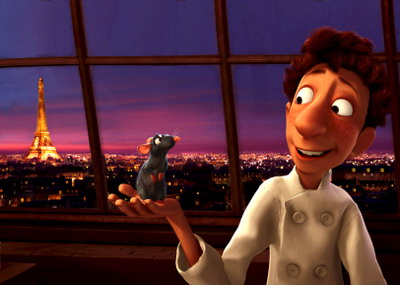 I just finished watching the latest Pixar movie Ratatouille. As most of you reading this know, I am a huge Disney fan and even a bigger Pixar fan! I was never disappointed in any of the Pixar films and this was no exception. Probably the greatest thing I love about Pixar films is the unknown. What I mean as unknown is when I first hear about a computer generated movie about a fish, monsters, talking toys, cars, a fat super hero, bugs or in this case a cooking RAT, it really makes me wonder, how the HELL are they going to pull this off? You will see a trailer or a commercial and get just a teeny tiny look into the world of Pixar and it is not until the end of the movie can you piece together the vision and the magic of the Pixar vision into the world of say a rat with a passion for cooking.

It was a great movie and defiantly went in its own direction. Brad Bird, the producer’s style and vision is amazing! With Pixar your never going to get a cookie cut, formula driven cheap movie. Instead you get an original classic of animated history! It is really starting to get hard to pick a favorite Pixar movie because they all hold a special place for me as I look back at them.

The animated short called “Lifted” before the movie was very funny and a great piece in itself. You can buy it for two bucks on iTunes!