Thank god they are doing a new Star Tours film! The other one needed work so bad!

Ok where are the next 3 movies! 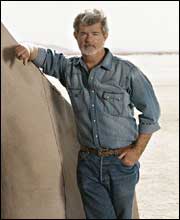 “Star Wars” creator/writer/director George Lucas made his guest appearance at “Celebration III” this morning at the Indiana Convention Center in Indianapolis and he talked about the franchise. About 9,000 fans had been lined up since midnight for a chance to see Lucas talk.

The event was hosted by actor Jay Laga’aia, who played Captain Typho in “Attack of the Clones” and “Revenge of the Sith,” though Lucas funnily made a mistake saying he thought Laga’aia played a Clone Trooper.

Lucas confirmed that they are working on two TV series. One will be a half hour 3-D computer animated series and the other is a live action series. The live action series will star some of the characters featured in the movies, though not the main characters. Lucas will kick-off the series himself. They are planning on writing the entire first season and then shooting Season One all at once. He mentioned Lucasfilm is aiming for a production start in about a year.

Also, George Lucas said that the “Star Tours” thrill ride at Disney-MGM Studios will be getting an overhaul soon. And he confirmed they are working on bringing the early 90’s TV series The Young Indiana Jones Chronicles to DVD as well.