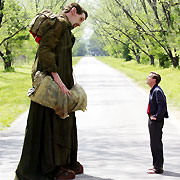 LOS ANGELES (AP) — Matthew McGrory, the deep-voiced 7-foot-plus actor who moved from appearances on Howard Stern’s radio show to a high-profile role as a gentle giant in Big Fish, has died. He was 32.

McGrory died Tuesday at his home in the Sherman Oaks section of Los Angeles, said director Drew Sky, who was working with him on his current movie, a biopic of wrestler-turned-actor Andre the Giant.

Paramedics determined he died of apparent natural causes, police said in a statement.