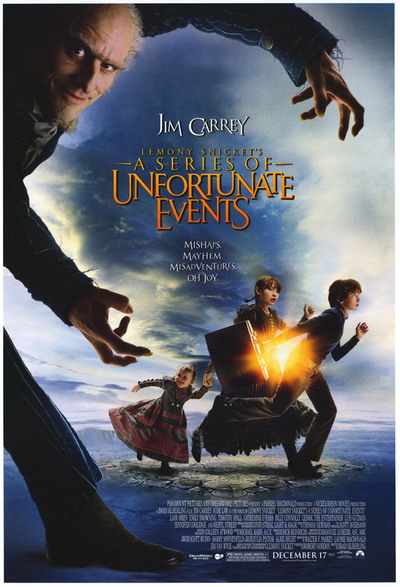 Jos and I saw Lemony Snicket tonight. I was pretty excited to see the movie. It reminded me of some adventure movies I loved when growing up. Also looked like Harry Potter meets Tim Burton. Granted I liked the movie, but there was something off. I don’t know, I am a big Jim Carey fan but it seems like the past say 4 or 5 movies, he is just off. I really can’t place it but again he misses as the lead in the movie. He wasn’t terrible, but like I said there was something missing. The movie looked GREAT and I loved the kids in the movie, especially Sunny, who cracked me up the entire movie! I recommend the movie, but its defiantly not the movie of the year!

The “Snicket” saga revolves around a pint-sized trio of orphans named Sunny, Klaus and Violet who find themselves fobbed off on a series of odd people, including Lemony Snicket, who narrates each of what has grown to a series of eight books since Handler debuted the first title in 1999. Recurring bad guy is a distant family relative named Count Olaf, who initially takes in the kids but clearly is trying to separate them from a family inheritance.