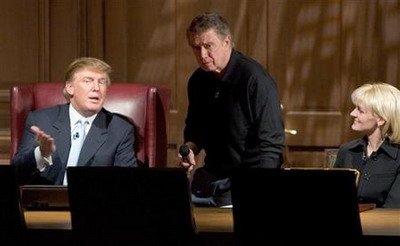 Reality TV rolls on as Kelly is hired as Trumps new Apprentice. I enjoyed both Survivor and The Apprentice this season, but I feel next season for both shows need change! For like the past like 7 shows, Kelly was the clear choice for most of Trump’s friends and colleagues picked Kelly over Jen ands really made Jennifer look bad. The funny thing is she looked impressive and was tough going into this final show, but Kelly was by far the clear choice. Granted the guy is stiff as a board and the personality to match. I really wish that he stood up in the end and stated that is something he needed to work on. He is by far a better all around likeable guy and I hope Kelly can come close to Bill. I went to Jos’s Christmas party and watched it a lil delayed on Tivo into 1 am! God bless Tivo, there is nothing worse then finding out the winner before watching the show! 🙂 Now on to those swimsuit and boxing reality shows! hehe

Trump Names Kelly Perdew ‘The Apprentice’ – NEW YORK (AP) – One key lesson if you want to be on Donald Trump’s payroll: don’t let the boss fly off unnoticed. The Donald chose software executive Kelly Perdew, 37, to join his staff during the season finale of “The Apprentice” on Thursday.

He rejected feisty lawyer Jennifer Massey despite her bare-knuckled fight for the job.

Massey’s fatal mistake on the reality show’s final challenge may have been not escorting Trump to a VIP reception. Instead, he walked to a helicopter and flew off.

Given the choice of a job in Las Vegas or New York, Perdew chose to help Trump on his massive development on Manhattan’s West Side.

Massey, 30, a Princeton and Harvard Law School graduate, attacked like a pit bull in the boardroom, even accusing Perdew of behind-the-scenes backstabbing. Her confrontational style eventually turned off Trump.

“Your teammates did not really like you too much and you did lose too much,” Trump said in “firing” Massey.

The Article on Excite News