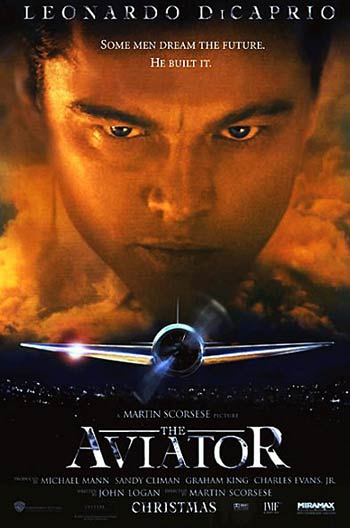 With many thing I talk about on my Blog, I was always fascinated by Howard Hughes. I remember when I was a kid researching information on Hughes. To me he faded out of peoples minds over the years and there wasn’t much on him until now. The Aviator comes out soon, taking a look at Hughes’s obsession with flight. There are so many facts and oddities about the man, I included a bunch of links below just so you can do a lil searching on your own and find out about this fascinating man. Leonardo DiCaprio looks like he did an amazing job portraying this man, who in later times totally lost it. After doing a little research, it appears this was triggered by a plane accident. The reviews I read, this is a great movie, one of Martin Scorsese’s best. I haven’t really heard of any other Oscar contenders, but this seems like a real favorite for best picture!

Drama – 168 min. – “The Aviator,” directed by Martin Scorsese and written by John Logan, tells the story of aviation pioneer Howard Hughes (Leonardo DiCaprio), the eccentric billionaire industrialist and Hollywood film mogul, famous for romancing some of the world’s most beautiful women. The drama recounts the years of his life from the late 1920s through the 1940s, an epoch when Hughes was directing and producing Hollywood movies and test flying innovative aircrafts he designed and created. – Release Date: December 17th, 2004, expands to wide release December 25th. – MPAA Rating: PG-13 for thematic elements, sexual content, nudity, language and crash sequence. – Distributor: Miramax Films

A biopic depicting the early years of legendary director and aviator Howard Hughes’ career, from the late 1920’s to the mid-1940’s. Focusing on his early years (from the 1930 production of ‘Hell’s Angels’ to the 1947 test flight of the Blue Spruce, when he was 42), this is the story of how young Howard Hughes transformed a small fortune into a massive one. The son of the Texan inventor of an amazing drill bit who died when he was 18, leaving him with 75% of the “Hughes Tool Co.”, Howard Hughes (DiCaprio) quickly moved to Los Angeles to become a Hollywood film producer, where he helped launch the career of Jean Harlow and other starlets, and producing such classics as Hell’s Angels, The Front Page, Flying Leathernecks, and Scarface (the 1932 original), eventually owning RKO Pictures. Hughes’ legend came not from focusing on just Hollywood, however, as he simultaneously branched into industry after industry, including aviation in 1932 (including TWA Airlines), and during WWII, defense, leading to the creation of the (infamous) Spruce Goose, a flying boat of immense size. After WWII, Hughes’ expansions continued, with an electronics company that was integral to the evolution of the satellite, and Hughes’ several Las Vegas casinos (though this film may be ending before he moves there). This film will also focus on Hughes’ romances with Hollywood stars like Katharine Hepburn (Blanchett) and Ava Gardner (Beckinsale). (Huston plays the president of TWA; Baldwin plays the president of their competitor, Pan Am). 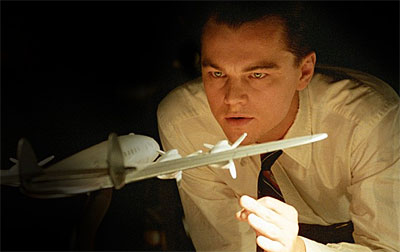 Here are some of the cool links I found: