Wow! What a week! First as my bud Chris puts it, I have turned to the dark side! Getting my Mac G5 that is hehe I really do love it and after “Pimping my G5” by adding the Airport Extreme Wireless Card, Bluetooth and adding The latest OS 10 Operating system Tiger all loaded, it is really making me want to convert! I still like a lot of things on the PC better and some of the substitutes on the Mac I was not as impressed with. It is really like starting over in some respects, learning a whole new operating system and computer. Trying to figure out, what is what and having that mystery and trying to figure basics again for the first time is a really weird feeling. I think once I get a lot of it down i will get a better feel for the Mac. 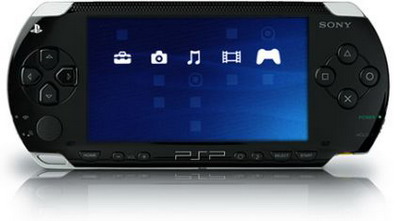 Just when you thought it was safe, I finally got my PSP! Holy crap, I played Chris’s and Rory’s but now I have a portable system to call my own. Granted, I did get a Nintendo DS over the holiday season, but unfortunately I did not really have any interest in any of the DS games out there and even resorted to buying some Game Boy Advance games instead.

I got to play a lil bit so far with my system and it really does live up to all the hype! I got 3 games for it already, ATV Off-road Furry Blazin’ Trails which is a really cool ATV racing game. I never heard of it before and I tried it first and it is a fun game. Next I tried Wipeout Pure, a game I had planned on getting all along, just for the simple fact you can hack the PSP and go online with it and surf the web! I looked into it and it kind of seems like a real pain in the ass, so I will put that challenge on hold for a bit. This is also a racing game, where you are racing ships in the future. It kind of reminds me of Star Wars Pod Racer and is another good racing game. Last but defiantly not least was Twisted Metal Head On. This game really rocks and is defiantly my favorite of the three! It is really demented and is a fun game to just pick up and play. It is defiantly as good as the old PS1 version I played years back!

I also tried a few other things on the PSP like photos and music files and it really is an impressive portable media center. They give u a measly 32 meg card, so there’s not much u can do with it, so plan on spending some bucks on getting a 1 gig stick to really hold the music, pod casts, saved games and video I plan on storing on it. I was a lil disappointed how smudgy and dirty it gets as soon as you make contact with it. Will these companies EVER learn 🙂 I will check back soon on more of my gadgets! I am off to Philly tomorrow to a Philley’s game at their new stadium! I can not wait!