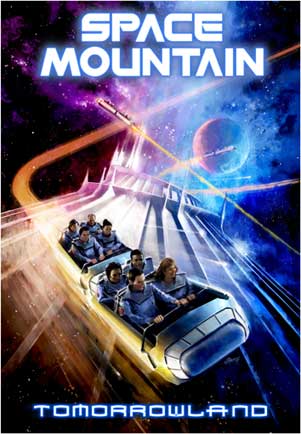 For more than two years, one of Disneyland park’s most beloved and thrilling attractions has been under wraps. Hopeful space pilgrims would make the trek to Space Mountain, only to find the doors to Disneyland park’s space station closed to the public for renovation.

At long last, on July 15, 2005, Space Mountain will reopen to transport travelers to the outer reaches of the galaxy. Will it be worth the wait? The Insider sat down and got the scoop from Imagineer Chrissie Allen, who worked on the refurbish – and who has personally embarked on dozens of test flights… on the attraction. She let us in on everything that’s new, improved, and out of this world about Space Mountain.

Most of us who had ridden it thought Space Mountain was pretty cool to begin with, so why improve on a good thing? According to Chrissie, it was time for a facelift for the attraction, which was nearly 25 years old (Space Mountain first opened at Disneyland park in 1977).

The improvements at Space Mountain have gone far beyond sprucing it up. Chrissie tells us, “There are all kinds of changes, from the front door to the exit.” When Guests arrive for their journey into space, they’re now greeted by a brand-new mezzanine with new plantings and a landing strip. The changes aren’t just pretty; they help the attraction tell a new and exciting story, she explains. “We’re calling it Space Station ’77, in homage to the opening year. At the front door, there’s a graphic that shows what Space Station ’77 looks like from outer space, and it’s really a cool image. The corridors have been completely redone. We’re trying to say that you’re entering the space station, and when you get on the ride you’ll know when you’re in the launch sequence, you’ll know when you’re in space, and you’ll know when you return.”

Blast off on the newly refurbished Space Mountain! Because the story is such an important part of the experience, in the new Space Mountain (unlike the old experience) FASTPASS and stand-by Guests use the same entrance, so they can be immersed in the same atmosphere from the very beginning.

That atmosphere continues inside. “All of the corridors are brand new. There’s new art, new graphics, a new safety video, and then you enter the spaceport. We’ve done some pretty cool stuff there. We took the old CMB300 space probe, and it looks like a new ship has returned in its place,” Chrissie reveals. “The main room still has a kind of ‘2001: A Space Odyssey’ look, but the space probe has undergone a great transformation. And the status board where they used to keep track of the launches has now become a beautiful window into outer space. It shows some footage of what looks like the planet Mars, and when you look up to this window, you get the feeling the station is rotating around this planet, and you see nebulae and meteorites and stuff going around. If you kind of lock in on it, it makes you feel like maybe the space station is rotating. It’s kind of a neat feature.”

One change to Space Mountain was actually part of the original plans for the attraction, but simply couldn’t be implemented with the resources available in 1977. “In the final launch tunnel, they wanted that tunnel to mechanically rotate. It’s very hard to do, because it’s about 90 feet of mechanical tunnel, rotating with a live ride track in the center,” Chrissie explains. “Now the designers at Walt Disney’s Imagineering unique Research and Development group have created a rotating tunnel using special effects. And everyone who’s been on it so far – some people think the tunnel IS mechanically rotating, but it’s all done with what we call ‘illusioneering’ – it’s a special effect that just makes it appear the tunnel is rotating.”

The attraction vehicles are also all new, and include state-of-the-art onboard audio systems – each vehicle holds a whopping 42 speakers! This ensures that the new soundtrack to your interstellar adventure (composed by Michael Giacchino, who scored “The Incredibles”) is heard to its best advantage. Chrissie tells us that the music has been carefully orchestrated to heighten the emotions Guests feel on their “joy ride through space” – including nervousness as they ascend through the final launch tunnel before rocketing off into the dark.

And that dark has never been darker. Although it’s not as high tech as the “window” into outer space or the revamped attraction vehicles, one of the most impressive changes at Space Mountain is the way the Imagineers send travelers hurtling through total darkness. “When you’re flying through the star field and the nebulas, you really can’t see what’s coming. The track and everything has disappeared,” says Chrissie proudly. How did they do this? “It’s magic!” she laughs. “We made dark, darker. We did it with black and black interior finishes. We closed up all the light leaks – doors and frames that let light in from the outside. I ride it a couple of times a day and I’m always amazed at how dark it is.”

Come July 15, we’ll all get the chance to share that experience, including some surprises Chrissie refused to ruin. Nerves of steel are optional, but the spirit of adventure is strictly required!