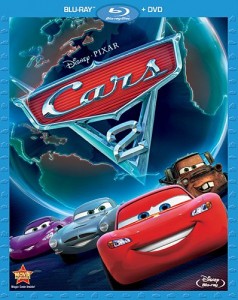 Although I have not seen it yet, yes I know its CRAZY, I am excited for the Blu-Ray release!  This may be the first Pixar movie I did NOT see in the theater!

Lightning McQueen (voice by Owen Wilson), Mater (Larry the Cable Guy), Sally (Bonnie Hunt), and the rest of the gang from Radiator Springs return to the screen in this sequel to Pixar’s Cars (2006). But instead of evoking a nostalgic vision of Route 66 through the American Southwest, director John Lasseter and his artists spoof James Bond films in a fast-paced adventure that mixes espionage and road racing. After a successful season on the track, Lightning is looking forward to some rest at home, but Mater gets him involved in an elaborate three-part international race sponsored by Sir Miles Axlerod (Eddie Izzard) to promote his new synthetic auto fuel. While serving on Lightning’s pit crew, Mater inadvertently gets mixed up with two British secret agent cars, Finn McMissile (Michael Caine) and Holley Shiftwell (Emily Mortimer), who are investigating a plot to sabotage the race. Myriad complications ensue before Lightning and Mater get back to the (relative) peace of Radiator Springs. The Pixar artists clearly had a lot of fun spoofing locations in Tokyo, London, Paris, and the Italian Riviera, and creating auto versions of sumo wrestlers, kabuki actors, Queen Elizabeth II, and a doting Italian mother. The use of 3-D adds adrenaline to the racing sequences. Cars 2 lacks the emotional impact of Toy Story 2, Up, and most of the other Pixar features, but that will do little to lessen its appeal to its target audience, boys who love cars, driving games, and car toys. Cars 2 is screening with Toy Story Toons: Hawaiian Vacation, a new short with Woody, Buzz, Barbie, Ken, and the rest of the Toy Story gang. (Rated G: minor toilet humor and a few scary moments.)