Walt Disney Parks and Resorts Worldwide is joining forces with visionary filmmaker James Cameron and Fox Filmed Entertainment to bring the world of AVATAR to life at Disney parks.  Announced on September 20 2011, the project will see an AVATAR-themed land begin construction at Disney’s Animal Kingdom in 2013, with opening expected in 2016.  The budget is speculated to be in the region of $500 million. 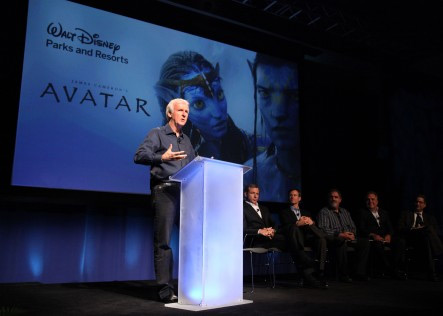 BURBANK (September 20, 2011) – Walt Disney Parks and Resorts Worldwide is joining forces with visionary filmmaker James Cameron and Fox Filmed Entertainment to bring the world of AVATAR to life at Disney parks. Through an exclusive agreement announced today by Disney, Cameron’s Lightstorm Entertainment and Fox, Disney will partner with Cameron and producing partner Jon Landau to create themed lands that will give theme park guests the opportunity to explore the mysterious universe of AVATAR first hand. Disney plans to build the first AVATAR themed land at Walt Disney World, within the Animal Kingdom park. With its emphasis on living in harmony with nature, Animal Kingdom is a natural fit for the AVATAR stories, which share the same philosophy. Construction is expected to begin by 2013.

“James Cameron is a groundbreaking filmmaker and gifted storyteller who shares our passion for creativity, technological innovation and delivering the best experience possible,” said Robert A. Iger, President and CEO of The Walt Disney Company. “With this agreement, we have the extraordinary opportunity to combine James’ talent and vision with the imagination and expertise of Disney.”

“AVATAR created a world which audiences can discover again and again and now, through this incredible partnership with Disney, we’ll be able to bring Pandora to life like never before. With two new AVATAR films currently in development, we’ll have even more locations, characters and stories to explore,” said James Cameron. ”I’m chomping at the bit to start work with Disney’s legendary Imagineers to bring our AVATAR universe to life. Our goal is to go beyond current boundaries of technical innovation and experiential storytelling, and give park goers the chance to see, hear, and touch the world of AVATAR with an unprecedented sense of reality.”

The agreement announced today gives The Walt Disney Company exclusive global theme park rights to the AVATAR franchise and provides for additional AVATAR themed lands at other Disney parks. The other locations will be determined by Disney and its international theme park partners. James Cameron, Jon Landau and their Lightstorm Entertainment group will serve as creative consultants on the projects and will partner with Walt Disney Imagineering in the design and development of the AVATAR themed lands.

“This exciting new venture combines the world of AVATAR with the enormous reach of Disney and the incomparable talent of Jim Cameron,” commented Fox Filmed Entertainment chairmen Jim Gianopulos and Tom Rothman. “While Jim is bringing audiences further into Pandora with the next two chapters in the AVATAR motion picture saga, the theme park attraction will likewise bring a new dimension to the amazing universe he created.”

“AVATAR is a uniquely powerful franchise that has global appeal with audiences of all ages. Its spectacular settings, intriguing characters, imaginative creatures, and strong themes of family and loyalty make it a perfect fit for Disney,” said Thomas O. Staggs, Chairman, Walt Disney Parks and Resorts. “We can’t wait to give our guests the ability to journey to Pandora and explore the incredible immersive world of AVATAR in person.”

In addition to setting a global box office record, AVATAR has been hailed as one of the most innovative and visually stunning movies ever produced. With its advanced motion capture and 3-D digital projection technologies developed by James Cameron and his team, moviegoers were able to connect with the world of AVATAR in new and engaging ways.

This new venture complements Walt Disney Parks & Resorts’ strategic efforts to continue to invest in its core theme park businesses around the world while simultaneously expanding into other parts of the family vacation business.

The official Disney Parks Blog hosted a question and answer session with Tom Staggs.  His responses to some of the questions are shown below.
Original article

We got quite a few questions about the timing of our first AVATAR experience at Disney’s Animal Kingdom, including this one from Adam, “Any idea when the experience will be open to guests?”

We’ve just begun the design phase on our Animal Kingdom project and we expect to begin construction in 2013. From start to finish, a project of this size and scope takes about 5 years to design and build. We can’t give you an exact date but we know that when it’s complete, it’s going to be a truly unforgettable experience.

2) IS THIS A PARK EXPANSION OR WILL “LAND” REPLACE SOMETHING?

Several of you asked a similar question, including Doug from Utah – “Will it replace any existing attractions in Animal Kingdom, or will it be built in a new parcel of land within the park’s boundaries?”

Well, Doug, we’re just beginning the Blue Sky process so I don’t have much to share about how we are going to execute our vision for our first AVATAR land but we’re focused on this being an important addition to Disney’s Animal Kingdom. I look forward to sharing more details as our plans progress.

Jenna from Winnetka, Ill., asks, “What types of attractions will be in AVATAR land?”

This was hands-down one of the most popular questions we got and understandably so. While we’re still in the very early stages of design and planning, we expect this land to be anchored by multiple attractions, entertainment, merchandise locations, restaurants and other immersive elements. Our AVATAR lands will give guests the chance to see, hear and touch the world of Pandora and we can’t wait to dive in with James Cameron and his team as we create new experiences that will delight and thrill our guests.

4) FILM IS PG-13, HOW DOES THIS MATCH W/FAMILY-FRIENDLY PARK?

Some of you, including Logan in Carnesville, Ga., asked about whether AVATAR was a good fit for a family-friendly brand like Disney.

Thanks, Logan, I appreciate your candor in asking this question. At its core, AVATAR is a film that embraces strong, positive themes of family, loyalty, living in harmony with nature and belief in oneself – all values that we share at The Walt Disney Company. You can be sure that these are the same themes that we will explore throughout our AVATAR lands. They will be places where friends and families can spend time together getting lost in a fantasy world, one of the true hallmarks of any Disney theme park experience. And with two sequels in the works, we feel this is a creative property whose potential is limitless.

5) AVATAR AT OTHER DISNEY PARKS?

We got several questions about whether there will be AVATAR experiences in parks/sites other than Disney’s Animal Kingdom. Kyle from Ontario asks, “Are there plans to add Avatar attractions at any other Disney parks?”

Well, Kyle, the only land we are announcing today is at Walt Disney World Resort but AVATAR is a possibility at any of our other locations. The first film AVATAR is a franchise with massive global appeal and its success at the box office both inside and outside of the U.S. – I should also note that as we determine our future locations, we look forward to working with our international theme park partners as our plans evolve.

Many of you, including Justin from Orlando, want to know, “How does AVATAR fit in with the Disney theme?” and more specifically, how does it fit in with the Animal Kingdom?

As I mentioned in a previous answer, AVATAR is a uniquely powerful franchise that has global appeal with audiences of all ages. With its spectacular settings, intriguing characters, imaginative creatures and strong themes of family and loyalty, it’s a great fit for the Disney brand and our parks.

Disney’s Animal Kingdom is the perfect place for our first AVATAR land because at its core, the park gives guests the opportunity to experience the worlds of animals and nature – real and mythical – in whole new ways. With AVATAR, we’ve found the perfect opportunity to let our guests explore one of the most compelling mythical worlds ever conceived. Animal Kingdom also celebrates adventure, living in harmony with nature and environmental stewardship – themes that are deeply rooted in the story of AVATAR.

7) WHY BUY SOMEONE ELSE’S IDEA INSTEAD OF LETTING WDI COME UP WITH SOMETHING?

Some of you asked why we would choose to collaborate with an outside partner rather than use our own Disney characters and stories to expand the parks. We are as committed as ever to creating attractions and entertainment around favorite Disney characters and stories – with Cars Land at Disney California Adventure park and our expansion of Fantasyland at Magic Kingdom Park being two great examples. At the same time, we like to look beyond our own walls at non-Disney properties, like STAR WARS and INDIANA JONES, creating some of our most popular attractions. At the end of the day, we are focused on creating a great experience for our guests and I truly believe that this unique partnership with James Cameron and AVATAR gives us an entire world of imaginative creatures, fascinating locations and intriguing characters with which to do that.

View the Internet Movie Database description, and see the “Pandora Discovered” video below for a look at the environement.

Where in Disney’s Animal Kingdom will AVATAR land be built?

Firstly, the area to the west of the park, and currently occupied by Camp Minnie-Mickey, is a strong contender. Originally planned for Beastly Kingdom, this area was largely put together as the park neared opening as a somewhat temporary “stop gap” until the next wave of construction could begin.

The second likely area that has been cleared and prepared for expansion is the area to the north of the park, just beyond Asia. This plot of land was prepped around the time of Kali Rapids for future expansion.

View a satellite image of the two expansion areas.

The rumored budget for the development at Disney’s Animal Kingdom is in the region of $500 million.

Media coverage of the AVATAR announcement