Well, I had another action packed weekend! I got busy again doing the Coors Light promotions! I was at Jenks on Friday and had the annual Turkey Trot in Manasquan on Saturday! What an event! That was at least my 5th year there and it was crazy as usual! 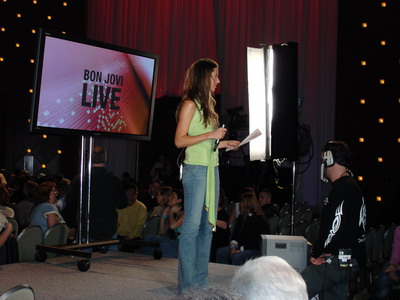 We headed down to the Borgata to check out Bon Jovi in Atlantic City! What a GREAT SHOW! It was to promote their new CD Box set, 100,000,000 Bon Jovi Fans Cant Be Wrong! I love the packaging for the CD. It is a send off of the Elvis album with the same title. The band is wearing gold leame’ outfits, just like Elvis wore on his album and look really cool! The CD is really interesting. I would say 70% of the CD has unreleased songs that the band has collected over the years. Some are obvious why they never seen the light of day. Jon even mentions during the show why some weren’t released and they used certain elements of the songs in different songs. When my wife and I listened to the CD, we would sings parts of other songs to these songs. One of my favorite tracks was David Bryans song he did for his musical, Memphis. I have never heard it and thought it was really good! 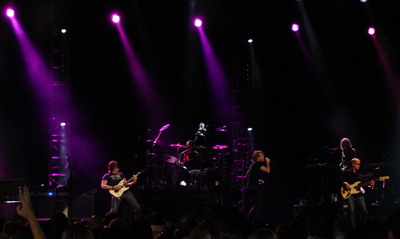 I actually thought some of the newer songs were better done live here in the year 2004. I enjoyed many of the new songs that were performed. I saw the web cast as well and thought that it was really shot well! My friend Anthony Bongiovi directed and thought he did an awesome job! Hey, I knew him when, TBJ Entertainment Rocks Baby! The show was good, new songs were mixed in with most of the Bon Jovi classics. My only complaint, I want to hear a different closer other than “Shout”!!!

Sunday during the day kicked off the new interactive Coors promotion, You Make The Call with the NFL. The first stop was very slow, but it was good cause I still needed to work out all the kinks. It differs from the last Miramax promotion we did because we add the element of NFL video clips to the equation. They are really cool and we got a few good people to do it! Come out and check it out someday 😉